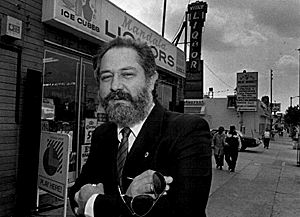 The local density of bars and liquor stores is directly linked to therate of violent crime in Los Angeles County, according to a School ofMedicine study.

The results of the study – the first specifically designed toinvestigate geographic associations between violent crime and alcoholoutlet density – were reported in the March issue of the AmericanJournal of Public Health.

As a base, researchers James H. Dwyer and Richard Scribner found thatin 1990, in an average Los Angeles County city of 50,000 residents,every 100 alcohol outlets would correspond to 570 episodes of violentcrime. For each additional alcohol outlet, they counted 3.4additional incidents of assaultive violence.

“Our finding that each additional alcohol outlet is associated with3.4 additional violent offenses is independent of socio-economicfactors,” said Dwyer, an associate professor of preventive medicine.

Researchers analyzed data from 74 contiguous Los Angeles Countycities with populations greater than 10,000. For each city, theycollected data on the incidence of assaultive violence, the densityof all alcohol outlets (both retail and on-site consumptionestablishments) and other socio-economic factors (the community’seconomic status, ethnicity, age structure, urbanicity and socialstructure).

In both animal and human experimental studies, alcohol consumption isconsistently linked to an increased tendency to behave aggressively.Bolstering these observations are numerous epidemiological studies,indicating that more than half of all reported violence involvesalcohol.

To decrease the incidence of violent crime, public health officialshave recommended that communities faced with unacceptable levels ofassaultive violence look to reduce the accessibility of alcohol.

“Our findings suggest the need for further studies to evaluate theimpact of actual change in alcohol availability on rates of violentcrime,” said Dwyer.