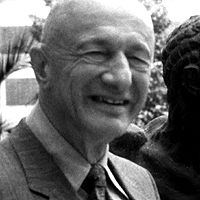 Munushian, who died May 28, had a vision for a new way to educate engineers by using television.

The USC Viterbi School of Engineering has created a new endowed chair to honor the late Jack Munushian.

Munushian, who was an emeritus professor of electrical engineering, spearheaded the USC Viterbi School’s efforts to establish a distance learning program. He organized the school’s computer science department and served as its first chair.

“To an extent few people realize, we at the Viterbi School live in a house that Jack built,” said USC Viterbi Dean Yannis Yortsos. “Our eminence in computer science and distance education grows directly out of his hard work and foresight.”

Educated as a physicist, Munushian began teaching at USC while he was still working at the Hughes Aircraft Co. Munushian and the engineering school’s charismatic dean, the late Zohrab Kaprielian, had met and become close friends while attending graduate school together at UC Berkeley. Munushian became a full-time USC professor in 1967 and was an emeritus professor at the time of his death.

Munushian, who died May 28, had a vision for a new way to educate engineers by using television. He persuaded the Olin Foundation to help the school of engineering establish the Instructional Television Network in 1972 and used his ties with Hughes, the Aerospace Corp. (where he had worked before joining Hughes) and other Southern California aerospace companies to make ITV successful.

State of the art for its time, ITV beamed graduate lectures directly from USC to numerous specially equipped classrooms located at aerospace company offices and factories throughout Southern California. The arrangement enabled working engineers to continue their education without interrupting their careers, a concept that continues today in the Viterbi School’s Distance Education Network.

In 1988, when the Institute of Electrical and Electronics Engineers awarded its highly coveted Major Educational Innovation Award to Munushian for his ITV achievement, the school had recorded more than 50,000 ITV enrollments.

“We no longer use television,” said DEN executive director Kelly Goulis, “but we still rigorously honor Jack Munushian’s insistence that distance education be in every respect on a par with instruction on campus.”

Faculty appointed to an early career chair are of the assistant professor rank and have shown distinguished accomplishments and promise for an exceptional academic career. A faculty appointment to the new chair is expected to be made this fall.