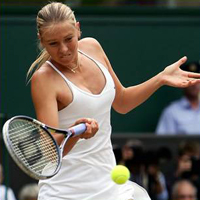 Commentators rarely seemed to report on Sharapova without also commenting on her appearance, the researchers wrote.

Despite a sea change in women’s athletics over the past three decades, men’s sports still receive more than 90 percent of the coverage on television news and sports highlights shows, according to a study co-authored by a USC professor.

Michael Messner, professor of sociology and gender studies in the USC College of Letters, Arts and Sciences, did the research with Margaret Carlisle Duncan, professor of human movement sciences at the University of Wisconsin-Milwaukee. The study began in 1989 and has been updated every five years since.

The most recent version, “Gender in Televised Sports: News and Highlights Shows, 1989-2004,” was released by the Amateur Athletic Foundation of Los Angeles, which funded the study.

“I think the predominant finding is the lack of change [in coverage],” Messner said. “The proportion [of TV coverage] is pretty much the same as it was in 1989.”

“The growth of girls and women’s sports … is really not reflected in the mainstream electronic media news coverage of sport,” he said. “It’s really an almost continuous cacophony of men’s voices telling us about men’s sports.”

The researchers found that:

� on the three network affiliates, men’s sports received 91 percent of the airtime, women’s sports got 6 percent and gender neutral topics got 2 percent;

� on the ESPN and Fox shows, women’s sports received 2 percent and 3 percent of the airtime, respectively � an even lower representation than on the network affiliates;

� all of the ESPN and Fox programs and 96 percent of the network affiliate shows started with a men’s sports topic as the lead story;

� many of the broadcasts in the sample contained no women’s sports coverage;

� all of the broadcasts sampled contained men’s sports coverage;

� there was less frequent trivialization and humorous sexualization of women than in past years; and

� 94 percent of the anchor people on the sports news and highlights shows were men, and no women anchors appeared on any of the three network-affiliated news shows.

Duncan said she “was surprised that there wasn’t less coverage of women’s sports and female athletes, given the conservative backlash in the culture.”

“But,” she added, “in terms of quantity and quality, what we found hasn’t changed greatly since our very first study. I think that forms of bias toward women’s sports are probably less overt � and more covert � now.”

Messner said that while reporting of women’s sports was more respectful than in past studies, the sexualization of female athletes was still an element of the coverage.

Extensive coverage of Sharapova is legitimate, the researchers wrote, because she had won a Wimbledon tournament.

“But the fact that commentators rarely seemed to report on Sharapova without also commenting (often jokingly) on her appearance indicated a continuation of the sexualization themes from past studies,” they wrote, noting one July 12, 2004 broadcast in which Fox commentators peppered their reporting with “lusty howls” when referring to her.

That taps into a larger issue, Messner said.

“When sports media do focus on a female athlete who is a good athlete like Sharapova, they’re much more likely to focus on someone like that because she still fits that ideal model of heterosexual attractiveness,” he said.

“Male viewers can still pigeonhole her as a sexual object, even as she’s kicking somebody’s butt on the tennis court,” he said. “Whereas women in some of the team sports � basketball, soccer � who are really engaged in sports that involve a lot of physical contact and muscularity … don’t get covered as much.”

Getting women involved in programming decisions at sports shows � and getting them on the anchor desk � were two of the remedies Messner and Duncan proposed.

� producers and commentators of these shows should educate themselves about the ways that humorous sexualization of women contributes to a “climate of disrespect” for female athletes, and they should routinely include women’s sports stories among their lead stories.

The researchers also suggested that viewers should take a more active role in demanding coverage of women’s sports.

“I don’t think that it will change in a big way until the producers and reporters see it as in their interest to change,” Messner said. “One way that can happen is for people to tell them what they want to see. I think they’ll respond to that.”

“I really think that the boys and men who are out there watching this stuff � especially younger guys � will benefit from seeing strong, competent women playing sports,” he said.

“Boys and young men are moving into a world where they’re working side by side with women. Women are going to be their bosses, in some cases, and they have to learn early on to respect the full range of women’s potential and capabilities. Sports are an important part of that,” he added.

“This is an important part of public education for young people. The respect for women’s capabilities and accomplishments is not just good for girls and women to see, but it’s good for boys and men to see as well.”

Coverage of Women’s Sports at Standstill