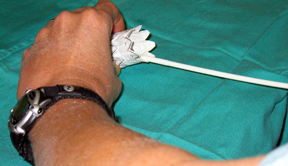 The stent, above, made of Gore-tex fabric, has accordion-like ridges that allow it to follow the curves of the aorta.

Surgeons at the Keck School of Medicine of USC and USC University Hospital can now repair life-threatening thoracic aortic aneurysms through a minimally invasive procedure, without opening the chest or cutting the aorta.

The team recently performed its first two procedures to install the Gore TAG endoprosthesis, a high-tech, sleeve-like device that fits inside the aorta and relieves the pressure on vulnerable aneurysms before they can burst. The procedures were Southern California’s first using the newly approved TAG device, which can be navigated into place through small incisions in the groin.

The surgeons are part of the Aortic Center at USC, an alliance of vascular and cardiothoracic surgeons who have joined forces to find the best solutions to patients’ aortic problems.

“Both surgeries went extremely well, and we’re optimistic about what this procedure means for patients: less loss of blood, a shorter hospital stay and quicker recovery time,” said vascular surgeon Douglas B. Hood, assistant professor of clinical surgery at the Keck School and co-director of the Aortic Center.

Robbin G. Cohen, associate professor of cardiothoracic surgery and co-director of the Aortic Center said the technology gives physicians and patients choices. “The Aortic Center unites surgeons with unique expertise so they can decide which treatment is the best option for a patient,” he said.

An aortic aneurysm is a ballooning of the wall of the aorta, the large, thick artery that carries oxygen-rich blood from the heart to the rest of the body. The aorta descends through the chest and abdomen.

Over a lifetime, parts of the aorta can weaken. The heart’s constant pumping of blood may push on these faulty areas, causing them to dangerously balloon and grow larger and more vulnerable. When this happens in the abdomen�an abdominal aortic aneurysm�a physician may notice a pulsating mass in the belly during a physical exam. But aneurysms in the chest, called thoracic aortic aneurysms, give few clues before it is too late.

“Most of the time, they are asymptomatic�until they rupture,” said Fred A. Weaver, professor of surgery and chief of the vascular surgery division. And when they rupture, 70 percent of patients die as a result.

Fortunately, such aneurysms are increasingly being discovered early through unrelated tests, such as chest X-rays or computed tomography, or CT, scans.

Physicians usually monitor patients until their aneurysms grow so large that the risk of rupture outweighs the risks involved in surgery�about 5 centimeters (cm) for abdominal aortic aneurysms and 6 cm for thoracic aortic aneurysms.

To fix the aneurysms, surgeons have traditionally used an open procedure in which they make an incision in the abdomen or chest, then temporarily clamp the aorta to cut off blood flow, remove the aneurysm, and suture in a graft. When the aneurysm lies in the chest�above the diaphragm�the operation is especially challenging, since it involves a thoracotomy: opening the chest and separating the muscles from the ribs. That requires a large incision and significant recovery time for the patient. It also requires great expertise on the part of the surgical team, because restricting blood flow to the important vessels of the spinal cord and renal system poses the risk of paralysis and kidney problems.

Over the last decade, vascular surgeons have developed less-invasive methods to treat abdominal aortic aneurysms using stent grafts that can be introduced through small groin incisions. For the past five years, USC vascular surgeons have used these specialized, high-tech devices in more than 50 percent of patients to treat their abdominal aortic aneurysm.

Now, it is time for thoracic aortic aneurysms to get their due.

On June 20 at USC University Hospital, 63-year-old Newport Beach grandmother Eva Goubert lay still on the operating table, anesthetized and unaware of the bustle around her. A patient of Weaver’s, Goubert had known for more than three years that she had an aneurysm. Since a friend of Goubert’s had become paralyzed after an aneurysm ruptured, Goubert had witnessed the potential effects of an aneurysm.

Hood and Weaver stood over Goubert. At their side was surgeon Curtis Prejean Jr., assistant professor of clinical cardiothoracic surgery at the Keck School, and a team of nurses, anesthesiologists and technologists.

“This is a big moment,” Weaver said. Hood nodded. “We’ve been planning this for a long time,” he said.

The surgeons made incisions in Goubert’s right and left hip, making their way to her iliac arteries. They created an entryway into the arteries, which would serve as a sort of freeway on-ramp�a port where they could enter the vascular system and thread their guidewires and cameras up toward the aorta. Surgeons usually prefer to introduce their catheters and wires through the femoral arteries, but in slimmer and smaller patients, surgeons must use the iliac arteries instead.

After taking an X-ray image of Goubert’s aorta, shown on a television monitor beside the operating table, the surgeons carefully guided a plastic tube into her artery and painstakingly threaded a device toward her heart. The device was their key payload: a TAG aortic endoprosthesis, compressed and densely packed into a tube no wider than a pinky.

When the team made sure the endoprosthesis was positioned just right within Goubert’s aneurysm, Hood grasped the slender rip-cord that trailed from the device like a tail. With a swift yank, he pulled the thread�and sprung open the TAG device within the aorta, much like a parachute.

The device, a 10-to-20-centimeter-long sleeve made of Gore-tex fabric, has accordion-like ridges that allow it to follow the curves of the aorta. Around its circumference runs kinked wires made of nitinol, a metal alloy that stiffens when heated to body temperature. When deployed, the device diverts blood flow away from the vulnerable parts of the artery wall, while withstanding the forces created by pumping blood.

After the surgery, Goubert was up and discharged from USC University Hospital within four days�significantly less than the 10-to-14-day hospital stay seen in an open procedure.

“For patients who are appropriate candidates for this procedure, this is a valuable option,” Hood said. “We’re very excited about it.”