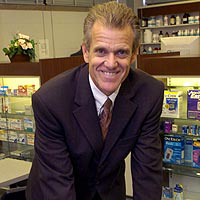 Vanderveen, who will oversee one of the nation’s leading Pharm.D. programs, begins Sept. 1.

Randall L. “Pete” Vanderveen, a dean and professor of pharmacy at Duquesne University, has been named dean of the USC School of Pharmacy.

“Pete Vanderveen is a distinguished academic leader who will expand upon the innovations in pharmacy research and professional development for which the USC School of Pharmacy is known,” said Provost C.L. Max Nikias.

“In the area of research, he will oversee graduate and doctoral programs that range from basic molecular mechanisms and toxicology to clinical investigation, from drug development and delivery systems to pharmaceutical economics,” Nikias said.

“In addition, he will oversee one of the nation’s leading Pharm.D. programs, which is producing progressive scientific practitioners who are enhancing patient care at hospitals, clinics and heath-care facilities everywhere.”

Vanderveen will succeed Timothy Chan, who has served as dean since Feb. 1, 1995. Chan will step down Aug. 31 and start a year-long sabbatical in Asia, where he will explore complementary and alternative medicine before returning to USC as a dean emeritus and faculty member. Vanderveen will start Sept. 1.

According to Duquesne, during Vanderveen’s tenure, the Mylan School rose to third in the nation in funding from the National Institutes of Health among all private schools of pharmacy; saw enrollment more than double in the M.S. and Ph.D. programs in pharmaceutical chemistry, medicinal chemistry, pharmaceutics and pharmacology-toxicology; and became the first school in the country to offer the Weekend Doctor of Pharmacy program, a part-time post-baccalaureate program.

“I am absolutely delighted to have been selected as the next dean of the School of Pharmacy at the University of Southern California,” Vanderveen said. “I am very much looking forward to working with the students, faculty and staff at USC and joining the Trojan Family.”

“I congratulate Dean Tim Chan for his great leadership over the past decade. Tim, the faculty, staff and students have clearly done wonderful things for the school,” he said. “The opportunity to work with them and the alumni to build upon this great tradition and, together, achieve even greater success is very exciting.”

Vanderveen, a board-certified psychiatric pharmacist, earned a bachelor of science and master’s degree in pharmacy and clinical pharmacy, respectively, from Purdue University in the 1970s. He earned his Ph.D. in university administration from Michigan State University in 1987 and graduated from the AACP Leadership Development Program in Duke University’s Fuqua School of Business in 1998.

Vanderveen started his formal teaching career at Ferris State University in Michigan in the mid-1970s and was named chair of the clinical pharmacy department before he was 30 years old. He took a job as assistant dean for pharmacy practice at Oregon State University in 1988 and helped develop the school’s first Pharm.D. program. He started at Duquesne in 1998.

He is a member of the board of directors of the National Institute for Pharmaceutical Technology and Education and belongs to numerous other professional organizations, including the American Association of Colleges of Pharmacy. He has also been an expert witness for various Pennsylvania and West Virginia law firms and a consultant for groups including McKesson Medication Management, Merck Pharmaceuticals, Pfizer Pharmaceuticals, Bristol-Myers Squibb and Rite Aid and Eckerd drug stores.