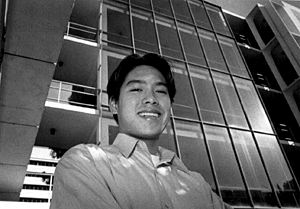 Above, a joyous Desmond Mun-Kit Koh after learning he had become USC’s eighth Rhodes scholar. Below, Koh at a swim meet.

The family doctor had prescribed swimming for his 10-year-old brother’s weightproblem, and Koh fell into the habit of doing laps with him.

“I wasn’t out to be competitive. I was just tagging along,” he said.

But discipline and persistence soon took hold, and Koh became a two-time Olympianand Singapore’s most decorated swimmer in competition today.

“People say athletes aren’t smart, but swimming helped me do well in school,” Kohsaid. “It taught me to focus. I had to follow a regular schedule. If I didn’tswim, I don’t know if I’d follow a routine. And I need a routine. I thinkeverybody does.”

When he is admitted to Oxford University, Koh will become the eighth Trojan tohave received a Rhodes Scholarship since the award was founded in 1902 by theestate of British philanthropist Cecil Rhodes.

Koh, who graduated in December with a B.S. in electrical engineering, trainedfive hours (four in the pool and one outside it) and swam nine miles a day whilestudying the intricacies of logic circuitry and semiconductor devices.

While his classmates had their hands full completing homework assignments, Kohalso had to juggle the demands of international athletic competition. Moreover,he got a late start in engineering – not declaring his major until he hadtransferred as a junior from Florida State University in Tallahassee.

“Very few people can manage such a balancing act, much less excel at it,” saidpresident Steven B. Sample. “We’re delighted that Desmond Koh has been selected.I’m especially proud of Desmond’s selection because he was one of my starstudents in an electrical engineering course that I taught in the spring of1994.”

“It’s very rare for a student to be able to do as well as is required in anacademically demanding field like electrical engineering while committing to theenormous number of hours of training that Olympic-caliber swimming requires,” hesaid. In fact, Koh will be USC’s first athlete to win the Rhodes since footballstar Pat Haden, in 1975.

His selection is also exceptional geographically. Of the 85 Rhodes Scholars-electfor 1995, he is the only one from Southern California.

Koh, who transferred to USC in 1992, hopes to embark this fall on a three-yearcourse in graduate-level management studies at Oxford. In the meantime, he hasreturned to Singapore to begin a mandatory 2 1/2-year tour of military service.He will receive a temporary reprieve from the obligation while attending Oxford.

That trip to the health club was a gamble that paid off in more ways than one.

Koh’s older brother, Terry, who is now trim and 24, also ended up competing atthe national level. A third brother took the plunge as well. But Desmond is – sofar – the family’s most accomplished athlete. He holds four national records inSingapore and has represented the island nation in five international games – the1988 and ’92 Olympics, the 1990 and ’94 Asian Games and the 1991 WorldChampionships. For the ’92 and ’94 competitions, he also served as team captain.

His specialties are the breaststroke and the individual medley, which requirescompetitors to rotate four different strokes.

The Koh brothers were anomalies in Singapore, where competition to get into oneof the nation’s two universities is so fierce – the winnowing process begins inthe sixth grade – that non-academic pursuits are discouraged.

“In Singapore, not many people do sports because of the extreme academicpressures,” Koh said. “They start dropping extracurricular activities.”

For him, however, swimming and academics became complementary passions. “Thesatisfaction I get drives me to achieve in both,” he said.

Koh’s U.S. academic career began after he graduated in 1989 at age 16 from aMethodist school in Singapore. The following January, he moved to Orem, Utah,where he started taking business courses at a junior college. But by July, he hadresolved not to endure another Utah winter.

Lured by the promise of a warm climate, Koh enrolled at Florida State, where hebrought the Seminole swimming team to first- and second-place finishes in theAtlantic Coast Conference in 1992. He also switched majors – to electricalengineering.

“I was good at math and physics, and I really wasn’t being challenged in thoseareas in business,” he said.

Koh was attracted to USC, he said, because of the strengths of its School ofEngineering and its swim team, which Mark Schubert had just been hired to coach.

“He’s had more than 10 gold-medalists in his career,” Koh said. “I thought I’dreally improve under him, and I did.”

The decision came with a price, however. In addition to loading up on classes, hehad to complete a fifth semester at USC. Still, Koh has no regrets.

“It’s challenging,” he said of the engineering program. “It feels good when youunderstand the material, because it’s so hard.”

A highlight of his academic career was EE330, the course in electromagnetismtaught by Sample.

“There were only 13 or 14 in the class, so we got to know him well,” Koh said.”He told us jokes and about succeeding in life and dealing with people. He taughtus about much more than engineering.”

Despite the demands of his degree and athletic career, Koh found time for a rangeof extracurricular activities at USC. He served as the 1994 president of theSingapore Students Association and sat on the International Students Assembly. Healso was a member of the Thai Students Association.

“In the engineering school, a lot of the students don’t do anything but go toclass,” he said. “They’re very studious, but I participate. I have fun.”

Koh also threw himself into the Southern California lifestyle, developing a tastefor alternative rock, coffee bars and classic American cars, even restoring a1966 Mustang. “Singapore is really restrictive,” he said. “I like the freedomhere.”

Koh swam as a Trojan during his first year at the university, nabbing a PAC-10Conference Silver Medal in the 400 individual medley in 1993.

For six months during 1993-94, he was sidelined with a knee injury. After herecovered, he starting training for the 1994 Asian Games in Hiroshima. Meanwhile,he was still paying the price for the switch in majors, carrying six classes eachsemester – one more than the standard load for engineering students. Thepressures, Koh said, prevented him from returning to the swim team as a senior.

“I was here on a mission to swim and to go to school, but I always made sureschool came before anything else,” he said.

In fact, he almost didn’t return to Singapore in November to accept hisgovernment’s congratulations when he learned that he was a finalist for theRhodes. “I’d already missed two weeks when I went to Japan [for the AsianGames],” he said. “I didn’t want to miss another week because I thought I’d getreally behind.

“My parents basically made me,” he said with a laugh. “They said, ‘this is anhonor. Not many people get it.'”

Koh learned during that trip that he had edged out the competition for the onlyRhodes Scholarship offered each year by his country. He is now awaitingacceptance to Oxford.

Despite his sacrifices, Koh has decided to study management at Oxford because, atthe graduate level, engineering typically means conducting research. “I’m not aresearch person,” he said. “I don’t want to sit in a laboratory and inventsomething. I like people. I want to be out in the real world.”

Driven as ever, Koh is looking ahead with an eye toward achieving a personaldream.

“I hope to have my own company or be a CEO in a large company,” he said. “Ibelieve management will help me.”