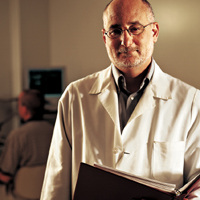 Hodis believes providing women with estrogen may slow the progression of atherosclerosis � an accumulation of cholesterol-containing plaques in the arteries. Atherosclerosis can block blood flow, causing heart attacks, chest pain and strokes.

Atherosclerosis-related disease kills 750,000 people a year, about a third of them postmenopausal women. Yet before the change of life, women for the most part appear protected from atherosclerosis.

Women will take the pills for about three years and must be free of heart disease or diabetes to join.

Women will not know whether they are on estradiol or a placebo. Regardless of which group they are in, women will receive free, regular checkups on the USC Health Sciences campus. Besides getting cholesterol and blood-pressure tests, women will receive nutrition counseling and annual mammograms and pelvic exams.

To monitor the progress of atherosclerosis, health professionals will measure the thickness of the carotid artery wall, located in the neck, in all participants enrolled in the study. Testing is done painlessly from outside the body. Researchers also will test participants to see if estrogen therapy affects thinking and memory.

The ELITE study has its origins in Hodis’ earlier studies. Back in 2001, Hodis and his colleagues followed more than 200 healthy women for a few years after menopause. Hodis compared the progression of atherosclerosis among women who were taking 17beta-estradiol to that in women who were taking a placebo. Progression slowed or seemed to halt in women on 17beta-estradiol.

At the time, some 6 million American women were already using HRT, consisting of combinations of an estrogen and a progestin (a synthetic form of progesterone, another female hormone), to combat the hot flashes and other menopausal discomforts that hit women at about age 51. In women who still have their uterus, progestin is given along with estrogen to reduce risk of endometrial cancer.

With the widespread use of HRT, giving estrogen to women in menopause seemed like a reasonable way to help prevent heart disease.

In July 2002, amid a flurry of media attention, the National Institutes of Health halted a portion of a large, ongoing trial called the Women’s Health Initiative, or WHI, which addressed the effects of HRT in postmenopausal women.

On the positive side, researchers found reduced risk of bone fractures, type 2 diabetes and colorectal cancer with HRT. They also saw that women who took hormones were no more or less likely to die compared to those who did not take hormones.

But Hodis notes that when scientists analyzed final data from WHI � rather than incomplete data � results differed significantly from those early, public findings.

Data actually showed HRT had no effect on coronary heart disease in general (though when they looked at participating women who had only recently undergone menopause, hormone use actually seemed to help the heart), and breast cancer risk was deemed significant using one statistical test but not using another test. “The public did not hear about these final results,” Hodis said.

Researchers, including scientists at the Keck School, note that observational studies have shown an increased risk of breast cancer among women using combined estrogen-and-progestin HRT. But they have not ruled out every type of hormone therapy, and they report that studies on estrogen-only therapies have shown more favorable results.

Most notably, the arm of the WHI study that followed women who were using only estrogen, without progestin, actually showed a trend toward less risk of breast cancer � and women using estrogen alone were more protected from coronary heart disease than women using no hormone therapy. That heart protection held especially true for younger women still close to the onset of menopause, a finding that Hodis will explore through ELITE.

In ELITE, women will receive vaginal applications of the hormone progesterone or a placebo to use for 10 days a month. Unlike combination estrogen-progestin HRT, this will deliver progesterone straight to the tissue that needs it � the lining of the uterus � while minimizing the rest of the body’s exposure to that hormone.

“The data remain conflicted and controversial, and even certain WHI investigators now concede in a recent publication that with all the data considered, the benefits of hormone therapy outweigh the risks,” Hodis said. “Women have a right to know if there is something out there that may help their health and quality of life, and we need to have further science done.”

Donna Shoupe, professor of obstetrics and gynecology, said she and others who work in women’s health are anticipating the study’s results.

“I think the ELITE study will be a landmark study that will establish the real benefits of estrogen replacement,” she said. “I think if women get good, solid, correct information, they will be able to make much better decisions in choosing whether or not to use estrogen therapy.”