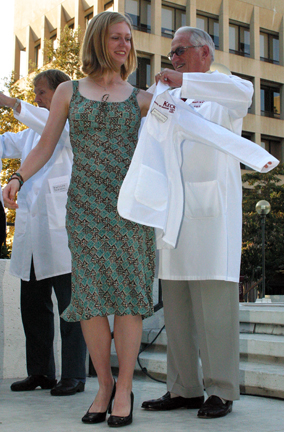 On paper, the Keck School of Medicine’s incoming first-year students are the best the school has ever seen. Now it is time for them to prove their potential.

The message from school leaders could not have been clearer at the Keck School’s Class of 2009 White Coat Ceremony, held Aug. 31 at the HSC Quad. Facing some of the school’s most talented faculty members and flanked by supportive parents and friends, the freshmen gathered en masse to undergo their traditional rite of passage and celebrate the beginning of their education as physicians.

“All of these people expect remarkable things from you,” said Clive R. Taylor, senior associate dean for educational affairs, motioning to the crowd. “So expect no less of yourself.”

In the annual event, Taylor and Keck School Dean Brian E. Henderson carefully placed a crisp, short white coat on each student as a symbol of the students’ hard-earned status as physicians-in-training.

“You will benefit from new and refurbished facilities here at the Keck School,” Henderson told students. In addition to improvements at Mayer Auditorium, the students also will experience the new LAC+USC Medical Center Replacement Facility scheduled for opening in 2007. “You’ll be the first class to go there, as medical students in your third year,” he said.

Students also listened intently to remarks from Peter Katsufrakis, associate dean for student affairs, and Keck School pediatrician Frank Sinatra, a graduate of USC’s medical school and gastroenterology specialist at Childrens Hospital Los Angeles, who encouraged them to adopt an attitude of curiosity. “In college you just want to do well on exams,” Sinatra said. “Here, the exams are competency exams…but simply being declared competent should not be your goal. Your goal is to develop an approach to life-long learning.”

Faculty members and Keck School leaders believe members of the Class of 2009 have particular potential for becoming standout physicians.

At 180 students, the class is the largest ever at the Keck School. School leaders expanded the size of the incoming class to help accommodate an anticipated increased need for physicians in the coming decades. The class is almost equally split by gender, with women making up 48 percent of the incoming students.

Overall, students come from 28 states, 17 countries, and 59 colleges and universities. In addition, 28 students are members of racial or ethnic groups considered underrepresented in medicine. “We are really happy with this class,” said Erin Quinn, associate dean for admissions.

To illustrate the class’s diversity, leaders note that students hold a wide range of interests. Among the skills or jobs held by members of the class of 2009: surf instructor, illustrator, pilot, caterer and brew master.

The event was sponsored by Salerni Collegium with support from the Medical Faculty Wives and Friends.

Other schools and professional programs also held white coat ceremonies to coincide with the start of the new school year. The USC School of Pharmacy held its event on Aug. 25, while the Department of Physical Therapy and Biokinesiology staged its ceremony on Sept. 1.

Predicting drought in the American West just got much more difficult

A new, USC-led study of more than 1,000 years of North American droughts and global conditions found that forecasting a lack of precipitation is rarely straightforward.

The renowned oncologist and cancer researcher will join USC in this newly created position in September.