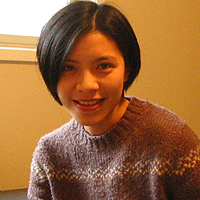 Karen Liu will join the engineering school’s department of computer science as an assistant professor in January.

A distinguished group of academics, ranging from honored and experienced senior faculty to young professors, have joined or agreed to join the faculty of the USC Viterbi School of Engineering.

“Our faculty is steadily growing stronger and more diverse,” said Dean Yannis Yortsos as he announced the recent series of faculty appointments. “The quality is uniformly impressive, and their far-ranging intellectual interests impact a number of important initiatives, including our recent initiative in nanotechnology. I am particularly pleased that we have been able to increase diversity and balance across departments.

“Two of our appointments are jointly with chemistry in the USC College, demonstrating our commitment to interdisciplinary research,” Yortsos said.

Karen Liu, who earned her Ph.D. from the University of Washington earlier this year, will join the Viterbi School’s department of computer science as an assistant professor in January.

Liu completed her undergraduate studies at the National Taiwan University with a bachelor’s degree in computer science and information engineering. Her research involves the use of physical and biomechanical principles to develop algorithms that streamline and improve the process of creating realistic character animations for advanced interactive computing and gaming.

Liu’s appointment will strengthen interactive computing and games, which are areas of importance for the department and the school.

Caire, who joins USC as a professor of electrical engineering (systems), comes from the Eurecom Institute, Sophia-Antipolis, France. He previously served on the faculties of the University of Parma and the Politecnico di Torino in Italy, where he also earned his doctoral degree. He also has held research appointments at the European Space Agency, Princeton University and the University of Sydney (Australia).

Caire has done prominent work in communications theory, information theory and coding theory, with particular focus on wireless applications. He was awarded the Jack Neubauer Best System Paper Award from the IEEE Vehicular Technology Society in 2003 and the Joint Information Theory/Communications Society Best Paper Award in 2004. He was elected to the board of governors of the IEEE Information Theory Society in 2004.

Lidar, who has been appointed an associate professor jointly with the department of chemistry in USC College, earned his Ph.D. in physics from the Hebrew University of Jerusalem, where he worked on scattering theory and disorder.

He was awarded Fulbright and Rothschild postdoctoral fellowships to pursue research in quantum computation at UC Berkeley, where he worked till 2000. He then joined the University of Toronto as assistant professor of theoretical chemistry and directed and co-founded the Center for Quantum Information and Quantum Control. He was promoted to associate professor in 2004 and has held cross-appointments in physics and mathematics.

Lidar’s research focuses on the problem of controlling open quantum systems, with a particular emphasis on quantum computers. He was awarded a Sloan Foundation Fellowship and was named one of the Top 20 Researchers Under 40 by the Canadian Institute for Advanced Research.

Cronin earned his Ph.D. in physics at MIT in 2002, after working in professor Mildred Dresselhaus’ research group, where he measured the transport properties of nanowires and quantum well structures. He subsequently conducted postdoctoral research measuring single-molecule optical spectroscopy and electron transport of individual carbon nanotubes at Harvard University with professor Michael Tinkham.

His main objective is to study the exceptional properties of carbon nanotubes using novel optical techniques and to identify and evaluate potential applications that exploit their unique properties. Cronin is the first appointment as part of the nanotechnology initiative launched at the Viterbi School last year.

Eva Kanso and Tait Pottebaum have joined the department of aerospace and mechanical engineering as assistant professors.

Kanso, who earned her Ph.D. in mechanical engineering from UC Berkeley in 2003, comes to USC from the Control and Dynamical Systems Group at Caltech. She has done novel work in developing reduced mathematical and numerical models that capture the fundamental principles of aquatic locomotion. Her work has important implications for the development of biologically inspired underwater vehicles that use shape changes for locomotion and dynamics control.

Pottebaum has joined the same department at the Viterbi School � aerospace and mechanical engineering � from which he received his undergraduate degree in 1998. Since then, he has completed his graduate studies at Caltech through a National Defense Science and Engineering Graduate Fellowship, earning his Ph.D. in aeronautics in 2003.

His research focuses on the relationship between wake structure and heat transfer for a heated, oscillating cylinder in cross-flow. His interests include micro-scale convective heat transfer, bluff-body aerodynamics, buoyancy driven flows, fluid-structure interactions and non-invasive temperature and velocity measurement techniques.

Roberts will join the department of chemical engineering and materials science as an associate professor. He also will receive a joint appointment in chemistry at the College. Roberts originally earned a Ph.D. in chemistry from Yale University in 1993 and later worked as a postdoctoral fellow at Harvard Medical School/Massachusetts General Hospital with professor Jack Szostak.

In 1997, he co-founded a biotechnology company (Phylos Inc.) and joined the faculty at Caltech as an assistant professor of chemistry. His research uses mRNA display, a patented technique he invented, for the purpose of peptide, protein and peptide-mimetic design. His awards include the Beckman Young Investigator Award, the Presidential Early Career Award in Science and Engineering (PECASE) and an Alfred P. Sloan Foundation Fellowship.

He has been a research assistant professor at the USC Nanostructure Materials and Devices Laboratory. Prior to that, Konkar worked in industrial R&D at Motorola and Agere Systems. His primary research interests are in nanoscale structural/chemical/electrical studies of hybrid inorganic/organic structures and synthesis of nanostructures for device applications.