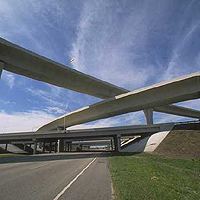 “These results suggest that tailpipe pollutants from freeway traffic are a significant risk factor for asthma,” said lead author James Gauderman, associate professor of preventive medicine in the Keck School.

Living near a freeway may mean more than the annoying rumble of cars and trucks: For children, it brings an increased risk of asthma, according to researchers in the Keck School of Medicine of USC.

Scientists studying air pollution levels in 10 Southern California cities found that the closer children live to a freeway, the greater their chance of having been diagnosed with asthma. The findings are reported in the November issue of the journal Epidemiology.

Researchers also found that children who had higher levels of nitrogen dioxide, or NO2, in the air around their homes were more likely to have developed asthma. NO2 is a product of pollutants emitted from combustion engines, such as those in cars and trucks.

“These results have both scientific and public health implications,” said David A. Schwartz, director of the National Institute of Environmental Health Sciences, the federal agency that funded the study. “They strengthen an emerging body of evidence that air pollution can cause asthma and that exposure to outdoor levels of nitrogen dioxide and other traffic-related air pollutants may be a significant risk factor for this illness.”

Researchers looked at the pollution-asthma link in 208 children who were part of the USC-led Children’s Health Study, the longest investigation ever into air pollution and kids’ health. The study has tracked the respiratory health of children in a group of Southern California cities since 1993.

The investigators placed air samplers outside the home of each student to measure NO2 levels. In addition, they determined the distance of each child’s home from local freeways, as well as how many vehicles traveled within 150 meters (about 164 yards) of the child’s home. Finally, they estimated traffic-related air pollution levels at each child’s home, using models that take weather conditions, vehicle counts and other important factors into account.

In all, 31 children (15 percent) had asthma. Scientists found a link between asthma prevalence in the children and NO2 levels at their homes.

For each increase of 5.7 parts per billion in average NO2 � which represents a typical range from low- to high-pollution levels among Southern California cities � the risk of asthma increased by 83 percent. Risk of wheezing and current asthma medication use also rose as NO2 levels increased.

The scientists also found that the closer the students lived to a freeway, the higher the NO2 levels outside their homes. NO2 levels also corresponded with traffic-related pollution estimates from the group’s statistical model.

It was not surprising, then, when they found that the closer the students lived to a freeway, the higher the students’ asthma prevalence.

Interestingly, the researchers saw that air pollution from freeway traffic influenced NO2 concentrations at homes more strongly than pollution from other types of roads. Traffic counts within 150 meters of homes (which primarily comprised traffic from smaller streets) were only weakly correlated with measured NO2.

In any community, a freeway is a major source of air pollution.

“Cars and trucks traveling on freeways and other large roads may be a bigger source of pollutants that matter for asthma than traffic on smaller roads,” Gauderman said. Scientists also find it difficult to get good data on traffic on smaller streets, which may make it harder to find associations between asthma and local traffic.

Gauderman cautioned that researchers do not yet know that NO2 is to blame for the asthma. NO2 travels together with other airborne pollutants, such as particulate matter, so it may be a marker for other asthma-causing pollutants.

The Children’s Health Study is supported by the NIEHS, California Air Resources Board, the Southern California Particle Center and Supersite, the Environmental Protection Agency and the Hastings Foundation.