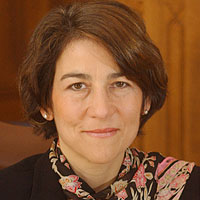 Renteln is an expert on cultural defense � the relevance of cultural background in court cases.

Alison Dundes Renteln, an expert on human rights and American politics, has been named director of the Jesse M. Unruh Institute of Politics at USC.

The institute � named after a man whose four-decade political career included stints as speaker of the California State Assembly and state treasurer � was created in 1989 to motivate students to become active in politics and to connect them with public officials.

The mission, to create a bridge between the academic study of politics and the practice of politics, is accomplished through lectures, internships, courses taught by political practitioners and a program that pairs undergraduates with faculty members on research projects.

Renteln, who has joint appointments in the political science and anthropology departments of the USC College of Letters, Arts and Sciences, said that in her new role she would like to create programs that have more of a global focus, such as internships with the United Nations.

“I would like to give our students the chance to work on United Nations reform from the inside,” said Renteln, who has taught at USC for 20 years and is a leading expert on cultural defense � the relevance of cultural background in court cases. She is author of the book “The Cultural Defense” (Oxford University Press, 2004).

“I also hope to develop a lecture series to highlight the accomplishments of women in politics and women who study politics.”

The institute’s overarching goal, Renteln said, is to encourage students to become active in the world of politics and even consider public service as a career possibility.

“I think that we have quite a different student body than what we had before,” she said.

“I think it’s an exciting time to be director because we’ve recruited such superior students. They are academically qualified but they’re also engaged.

“Young people have a passion to find ways in their academic work to prepare to do something later on.”

To learn more about the institute, visit https://www.usc.edu/schools/college/unruh/.