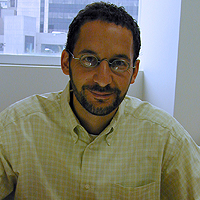 Michael I. Goran serves as director of the Transdisciplinary Research on Energetics and Cancer at USC.

The National Cancer Institute has awarded researchers in the Keck School of Medicine of USC $12.1 million over five years to create a center to study the relationship between obesity and cancer.

The Keck School of Medicine is one of four institutions nationwide selected by the NCI to conduct the five-year, $54 million Transdisciplinary Research on Energetics and Cancer (TREC) initiative, which will unite researchers who focus on diet, weight and physical activity and their effects on cancer.

“TREC will bring together outstanding scientists from many disciplines,” said Robert Croyle, director of NCI’s Division of Cancer Control and Population Sciences. “Together these experts will answer critical questions that will help guide our nation’s public health efforts. NCI is determined to help avoid an increase in cancer deaths in the 21st century due to obesity like the one caused by tobacco in the 20th century.”

Keck School researchers specifically will address how to deter cancer by preventing and controlling obesity during childhood and adolescence � the critical, formative period that sets the stage for the remainder of the life cycle.

“Obesity and related factors such as poor diet and inactivity are known to contribute to cancer risk, and these are factors we can actually do something about,” said Michael I. Goran, Keck School professor of preventive medicine and physiology and biophysics, associate director of the USC Institute for Prevention Research and director of the new TREC Center at USC. “Our goal is to study obesity from all directions � from physiology to behavior � and focus on children from high-risk ethnic groups to further understand ethnic disparities in the relationships between obesity, metabolism and health.”

Leslie Bernstein, holder of the AFLAC Chair in Cancer Research and professor of preventive medicine in the Keck School, will serve as associate director of the USC TREC Center and also lead the center’s training and career development component.

Bernstein is known for her extensive studies examining links between hormone exposure, obesity and physical activity and cancer risk.

“We know that being overweight or obese raises risk for several types of cancer � including breast, kidney, colon, esophageal and endometrial cancers � and that physical activity reduces risk of some cancers,” Bernstein said. “By focusing on children, we hope to learn how to impact obesity early in life by increasing physical activity and changing environmental factors, and to uncover some of the biological mechanisms that link obesity and physical activity to cancer risk.”

The USC TREC research program focuses on children because obese children frequently become obese adults. Over the past two decades, the percentage of overweight teens in the United States has tripled from 5 percent to 16 percent. And certain ethnic groups are more vulnerable to obesity than others. Today, experts estimate that 44 percent of Latino and 40 percent of African-American teenagers are considered overweight, about double the prevalence among Caucasian children.

“We are thrilled to be selected as one of four sites across the nation to conduct this research,” said Keck School Dean Brian E. Henderson, holder of the Kenneth T. Norris Jr. Chair in Cancer Research. “The center reflects the transdisciplinary research we intend to foster here � research that improves public health, from cancer to metabolic diseases.”

Keck School scientists will lead three interrelated projects:
� examining cancer-related metabolic risk factors in overweight African-American and Latino teens and the use of strength training as a way to improve them. (Project leader: Goran)

� finding the physiological and psychosocial reasons that African-American and Latino girls slow or halt their physical activity in their teens. (Project leader: Donna Sprujit-Metz of preventive medicine); and

Research cores will support the projects. A human measurement core will provide access to state-of-the-art measures for metabolic and behavioral assessment.

Richard Bergman and Joyce Richey, of physiology and biophysics, and Sprujit-Metz will co-direct the core.

A data management and analysis core will be led by Stan Azen, Kiros Berhane and Chih-Ping Chou, all from preventive medicine. USC TREC also will fund innovative pilot projects and foster training and career development in the study of the relationship between obesity and cancer.

Other TREC centers include Case Western Reserve University, the Fred Hutchinson Cancer Research Center and the University of Minnesota.

For more information on the initiative, visit http://www.cancercontrol.cancer.gov/TREC.