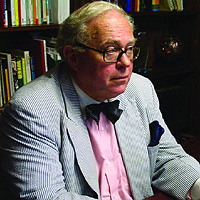 California’s state librarian emeritus is in his element when speaking of times past.

At 13, Starr used paper-route money to buy his first book, Carl Sandburg’s “Life of Lincoln” � one in a six-volume series. The worn, dog-eared book was his refuge.

“I basically raised myself,’’ Starr said. “I was the kid of two dysfunctional parents looking out into the world. I looked around at opportunities. ‘How am I going to design my life?’ And that’s what I did. I designed my life.”

Starr says this without a trace of self-pity or chip on his shoulder, but in the straightforward manner of a historian.

Arguably California’s leading historian and state librarian emeritus, he is in his element when speaking of times past, as the USC College history professor has done in “California: A History” (Random House, 2005), his 12th book about the Golden State.

Although Starr has written more than a million words about the mercurial 31st state, he clearly has not lost his passion for the subject.

His latest work describes California in vivid detail from 1533, when Spanish explorers landed on what they mistook for an island. A few years later, they named it California after the mythical gold- and gem-laden island Garci Ordonez de Montalvo described in his 1510 romance bestseller, “Las Sergas de Esplandian.”

Starr’s one-volume history ends during another watershed moment for the El Dorado state (its first nickname following the discovery of gold in 1848). The events end in May, when Los Angeles City Councilman Antonio Villaraigosa was elected the city’s first Hispanic mayor since Cristobal Aguilar left office in 1872.

A journey through California modern life under the jurisdictions of Spain, Mexico and the United States, the book arrives at no authoritative conclusion. Rather, it gives readers a perspective of the chain of events leading to present-day in the diverse, polyglot state � the first ever to reach a trillion-dollar economy in gross state product.

“It’s a 100-yard dash through California’s history,” Starr said of the book.

Currently, he’s working on the last of his seven-volume history of the “Americans and the California Dream” series, published by Oxford University Press. That one will describe the state from 1950 to 1963, ending, Starr said, “just before the civil rights movement when the world changed.”

For a history buff thirsty for knowledge but who doesn’t want to read volumes, “California: A History” is a tall glass of water � or glass of milk and honey, if one wishes. Throughout the 342-page book, Starr doesn’t try to mask his enthusiasm. He’s relieved, for example, when the Spanish Crown in 1765 finally makes a decision about Alta California after mulling it over for 70 years.

Nor does he pull punches when describing the first Spanish settlers’ violence against the culture and human rights of the indigenous people. He also doesn’t shy from addressing the early Spanish soldiers’ sexual exploitation of Native American women.

“As a historian,” Starr said, “you have got to tell the truth.”

He approaches his own life with the same intensity and sense of wonder.

Inside his office at USC, Starr sat behind a large desk wearing a Navy blue-and-white pinstriped shirt and a signature red bowtie. Rather than world-weary, his eyes reflected conviction and a soft heart. Raising his bushy brows for emphasis, he talked about his early tumultuous years and how he ended up at the boys’ orphanage.

Called the Albertinum, the orphanage was nestled in the tranquil, pastoral Northern California town of Ukiah. There, Dominican nuns raised him and gave his chaotic life stability.

“The sisters were wonderful,” Starr said. “Best thing that ever happened to me. The nuns showed me a world of order. They taught me to have dignity and high standards.”

Born Sept. 3, 1940, Starr lived with his parents and younger brother in San Francisco, where his father was a production machinist. When Starr was 3, his father developed a brain tumor and lost his sight. The stress took its toll on the young couple, and they divorced. Raising two young sons alone during World War II, Starr’s mother suffered a breakdown. Kevin and his brother were shuffled from grandmother to aunt.

“We moved around from place to place,” Starr said. “We became a burden on my grandmother and aunt. They weren’t prepared to take us in.”

The boys were placed in the Albertinum, founded in 1903 by Dominican sisters. In Ukiah, 18 miles from the rugged coastline and surrounded by redwoods, the young historian in the making was captivated by his new world.

He remembered the nuns draped in black robes and white habits, and the priests who conducted Mass in the mornings donning long, black cassocks, white surplices and birettas topped with pom-poms. He can still smell the incense as he lit candles at the altar during Mass when he was an acolyte.

He remembered his “housemother,” Sister Maritia, whom he befriended until her death in her 90s. He recalled Sister Maritia’s soothing voice as she read “Robinson Crusoe,” “Swiss Family Robinson” and “Lives of Saints” at night. Afterward, the boys said their prayers. Then it was lights out. In the mornings, he awoke to the murmur of sisters chanting the divine office.

“The nuns were firm yet kind,” Starr said. “They were strict but never cruel.”

Although she was ill, Starr’s mother tried to reunite the family. She took her boys out of the Albertinum and went on welfare to keep a roof over their heads.

“She really tried to make a home for us,” Starr said. “But she never really recovered from her nervous breakdown. She couldn’t pull it together.”

The boys returned to the Albertinum. At 11, Starr resolved never to be poor.

“I saw what it was like,” Starr said. “I didn’t like that culture. I knew I didn’t want to ever live that way.”

A stalwart child, Starr looked older than his years. By age 11, he was working as a paperboy and printer’s helper. He bought his own clothes and books. He spent free time at the Albertinum’s library and the bookshop in Ukiah. He took in matinees like “Samson and Delilah,” “Gigi” and the 1952 “Moulin Rouge.”

Starr earned a bachelor’s degree from the University of San Francisco before serving in the military in Germany. He then earned a master’s and a doctorate from Harvard University, and a Master of Library Science degree from UC Berkeley.

While an 18-year-old freshman, he spotted a pretty young woman sitting alone watching the sunset.

Sheila Gordon was 17 and a student at the San Francisco College for Women.

“I was walking along the street in San Francisco and saw an absolutely beautiful girl,” Starr said. “So I went up to her and introduced myself. I asked her if I could call on her.”

“Kevin was walking along a street,” she began. “I was sitting at the top of a hill, called Lone Mountain, where the college was located. I was watching the sunset over the Golden Gate Bridge. Kevin climbed up the hill to talk to me.”

They eventually married and had two girls, Marian and Jessica. In June, the couple celebrated their 42nd wedding anniversary with their daughters and six grandchildren.

In the late 1970s and early ’80s, Starr wrote a daily column for the San Francisco Examiner and became a Vatican correspondent for Hearst Newspapers. As a correspondent in Rome, Starr covered the elections of John Paul I and John Paul II. In 1978, Starr met Karol Wojtyla, the year Wojtyla became John Paul II. Starr called the charismatic John Paul II, who died in April, “the rock star pope.”

“At one time he was an athletic skier and canoeist,” Starr said. “He filled the room with the physical vigor of an athlete.”

“The current Holy Father is much more quiet and more of a scholar,” Starr said. “He doesn’t fill the room with physical valor. But sometimes it’s good to tone down the charisma. He brings his own gifts to the papacy.”

A devout Catholic who believes in evolution, Starr plans to write a book of essays about the Catholic experience in America.

At 65, he will not retire anytime soon.

“If I retired, I’d do the same thing I’m doing now,” Starr said. “Besides, who’d teach my students?”

Starr, a regular contributor to the Los Angeles Times editorial page, said he would never tire of writing about California. He and Sheila enjoy tracing California’s history when they travel to Mexico and Spain.

“I’m grateful to almighty God for my life,” Starr said. “I’m overwhelmed by the mystery of life. I’m filled with wonder and awe. And I have deep gratitude.”

He dedicated his newest book to USC President Steven B. Sample and his wife Kathryn.

“I felt comfortable doing that,” Starr said. “I’m grateful for the culture he’s helped establish here at USC. The president and I, and my wife and Kathryn, are friends. And I suspect there are hundreds and hundreds of people who could say the same thing.”

So what might someone say after discovering Starr’s latest work? One word comes to mind.

A lot remains unclear about the brewing battle — from the timing and how it might help or hurt the presidential candidates, to whether it will galvanize voters motivated by issues like abortion, religious freedom and health care. USC experts weigh in.