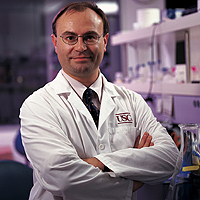 Patients with advanced stomach cancer have a new investigational treatment option: a regimen that combines two chemotherapies into a one-two punch while offering more convenience and potentially less discomfort.

Oncologists at USC/Norris Comprehensive Cancer Center are part of a phase 3, multi-center clinical trial to test the effectiveness of a new drug, called S-1, combined with the platinum-based chemotherapy cisplatin in patients with advanced gastric cancer.

“What makes this regimen exciting is that it not only has the potential to fight cancer more effectively than our standard therapies, but also is meant to make treatment easier on the patient,” said gastrointestinal oncologist Heinz-Josef Lenz, associate professor of medicine in the Keck School of Medicine of USC and USC/Norris Comprehensive Cancer Center.

Experts estimate that 21,860 Americans will be diagnosed with stomach cancer during 2005 and another 11,550 will die from the disease.

At diagnosis, about 50 percent of patients have cancer that has spread beyond the stomach and cannot be successfully treated simply through surgery. As a result, physicians today use a variety of chemotherapy drugs against stomach cancer. Yet researchers have not found a standard chemotherapy regimen that dramatically improves survival more than any other.

One commonly used drug is the traditional chemotherapy called 5-FU, or 5-fluorouracil. Studies have shown that when cisplatin is combined with 5-FU, cancer shrinks in 46 percent to 51 percent of stomach cancer patients. The combination of S-1 and cisplatin aims to take that a step further.

S-1 consists of a number of parts. One portion of S-1 actually breaks down into 5-FU in the body. At the same time, it contains another element that keeps levels of 5-FU fairly steady in the body, reducing the ups and downs of chemotherapy.

S-1 contains a third element, too, that fights 5-FU’s toxic effects in gastrointestinal tissues � a cause of chemotherapy nausea and vomiting. Finally, it is available in a capsule, instead of through an intravenous infusion, making it more convenient for patients.

Researchers will compare the standard therapy’s effectiveness to that of S-1 and cisplatin.

The S-1 patients will take an S-1 capsule each day for three weeks and receive an infusion of cisplatin on the first day of that cycle. After a week off from medication, they will begin the cycle all over again.

Patients in the other group will take 5-FU intravenously for five days and receive an infusion of cisplatin on the first day of the cycle. Physicians will repeat the regimen every four weeks.

Lenz is optimistic about the drug’s potential. “At USC/Norris, we established the genetic profile giving the rationale for this drug, so we understand how and why it works,” he said. He noted that another early study in Japan of S-1 and cisplatin for advanced gastric cancer showed that 19 of 25 patients, or 76 percent, responded to the drug.

The most common side effects were fatigue, nausea and anorexia.

S-1 is under development by Taiho Pharma USA Inc.

For information about the gastric cancer clinical trial or for eligibility requirements, call USC/Norris at (323) 865-3967.