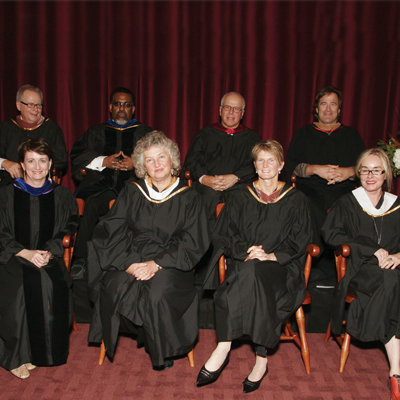 The USC School of Cinema-Television installed eight new chair holders Oct. 24, marking a major milestone in its academic mission, as well as increasing its endowed ranks to 12 and setting a record for funded professorships among leading U.S. film schools.

The chair holders, whose expertise runs the gamut from editing to interactive entertainment to race and popular culture, honor some of the nation’s leading practitioners and theorists in film, television and interactive media in addition to recognizing the importance of the areas in which they specialize.

“The history of endowed chairs in higher education stretches back over half a millennium,” said keynote speaker Stanley Gold, president and CEO of Shamrock Holdings Inc. and chairman of the USC Board of Trustees. “And here at USC, they have played a vital role in cementing this university’s reputation as a world-class center for research and artistic practice.”

The School of Cinema-Television installed its first chair holder in 1993 with the creation of the Steven J. Ross/Time Warner Dean’s Chair, currently held by Elizabeth M. Daley.

“The foresight and generosity of chair donors have been a key element in sustaining our position at the leading edge of professional schools,” Daley said. “Their investment yields results across the boards � from teaching, to research, to development of both new technical and artistic applications, as well as new theoretical models for understanding how film, television and interactive media impact our society.”

“The creation of an endowed position is what brought me to USC from the University of California, San Diego,” said professor Ellen Seiter, who assumed the Stephen K. Nenno Endowed Chair in Television Studies. “And it represents the high point of my career after 24 years of university life.”

The roster of chair presenters featured leaders from across the entertainment spectrum, including: Paul Lee, president of Electronic Arts; Michael Nowacki, vice president of News and Late-Night Sales for CBS Television; Keith Lawrence, president and CEO of the Mary Pickford Institute; Katherine Price and Frank Price, chairman and CEO of Price Entertainment Inc., who is also a USC Trustee and chairman of the School of Cinema-Television Board of Councilors; and cinematography professor Woody Omens and sound designer Gary Rydstrom on behalf of filmmakers George Lucas and Steven Spielberg.

The installation of the chair holders marks the latest success in the campaign begun last year during the school’s 75th anniversary celebration to raise the Cinema-Television endowment.

In addition to supporting academic activity in selected areas, endowed chairs also serve to honor the talent and legacy of individuals who might not be publicly well known, but who nonetheless were major forces behind the creation of our popular culture, including:

Ken Wannberg, who has been composing and conducting in Hollywood for over half a century and is known for his collaborations with John Williams, which have yielded a cache of theme songs ranging from “Star Wars” to “Saving Private Ryan”; Kay Rose, who earned an Academy Award for best achievement in sound editing in 1984, worked with prominent directors and influenced scores of young USC filmmakers, including George Lucas, who sought her advice on his film “THX 1138”; USC alumnus Conrad Hall ’50, an Academy Award-winning cinematographer who filmed nearly three dozen movies, among them “Butch Cassidy and the Sundance Kid” and “American Beauty”; and Stephen Nenno, who graduated from USC in 1959 and rose through the ranks at ABC to become the network’s vice president of program operations.

Endowed Chairs of the USC School of Cinema-Television

Previously endowed faculty positions in the USC School of Cinema-Television