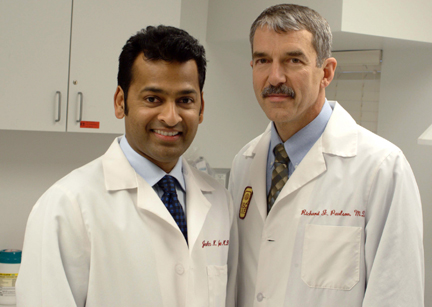 In all, 20 participants (ages 35 and under) are participating in the trial.

The participants achieved pregnancy following retrieval of their own oocytes (human eggs) and the oocytes’ cryopreservation, thawing and fertilization.

The embryos were then transferred back to the patient.

USC Fertility’s research project, which began in September 2004, is unique in that it is the first organized prospective study in which all of the eggs taken from each candidate in a single aspiration were frozen.

“This is very exciting news,” Jain said. “Our interim study data show that oocyte cryopreservation has become a viable clinical option. Our experience suggests that efficacy is much higher than previously thought and that we have turned a corner.”

Jain is principal investigator on the self-funded study, while Paulson is co-investigator. USC Fertility’s laboratory director, Mary Francis, is the project’s lead embryologist.

“Much of this early success can be attributed to how well the new culture medium is working,” Francis said. “We’ve been able to use our standard embryo-freezing equipment with only a few, very minor adjustments.”

Paulson added: “While our sample is small and our data are still preliminary, we are nonetheless highly optimistic that this high rate of success will continue in the future.”

Jain, Francis and Paulson plan to publish their complete conclusions after the study ends in early 2006.

While physicians have used frozen sperm and frozen embryos to help couples achieve pregnancy for decades, the practice of cryopreserving eggs for future fertilization remains relatively rare, with only about 200 babies born worldwide through this technique – far fewer than the more than 1 million born after in vitro fertilization without freezing.

The first pregnancy from a frozen egg was reported in 1986.

However, physicians have not yet established egg freezing as a standard fertility therapy. To do that, they must evaluate the therapy through rigorous scientific testing and peer-reviewed studies. The American Society for Reproductive Medicine currently considers egg freezing investigational and recommends its use only in clinical trials.

Paulson explained that the group has honed the technology in a number of areas: the stimulation of egg production, the slow-freezing method and culture medium, and thawing and transfer techniques.

Only after they were confident of the technology’s potential did they begin their clinical trial.

USC Fertility physicians have a 20-year background in cryopreservation: In 1986, USC doctors achieved the conception of America’s first baby born after embryo freezing, and in 1987, they reported the first triplet pregnancy after frozen embryo transfer. Earlier this year, they reported the nation’s first triplet pregnancy using oocyte cryopreservation.