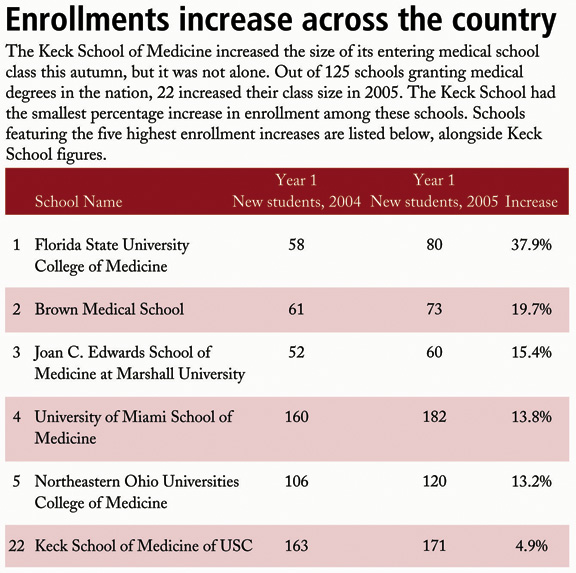 The Keck School of Medicine is one of 22 medical schools across the country to significantly increase enrollment this autumn, making the 2005-2006 nationwide entering class its largest ever, according to the Association of American Medical Colleges (AAMC).

“With a physician workforce shortage looming, it’s encouraging that more young people are attracted to a career in medicine, and that the efforts to increase student enrollment at U.S. medical schools are succeeding,” said AAMC President Jordan J. Cohen. “This is a good beginning on the increase in the nation’s supply of doctors that the AAMC believes is necessary to ensure that the health-care needs of all Americans are met in the next decade.”

Twenty-two of the nation’s 125 allopathic schools�institutions that grant doctor of medicine degrees�expanded their class size by 5 percent or more, with seven of these 22 institutions boosting first-year enrollment by more than 10 percent.

Of the 22 schools, the Keck School had the smallest increase, boosting numbers of new students in the class from 163 in 2004-2005 to 171 in 2005-2006. That is an increase of 4.9 percent, significantly smaller than the school with the biggest enrollment gain: Florida State University College of Medicine. Florida State’s medical school grew by 37.9 percent, from 58 students to 80 students, over the same time period.

Medical school applicants for the 2005-2006 school year also increased to 37,364 students nationwide, a 4.6 percent gain over 35,735 who applied last year. Latino and Asian applicants drove the increase. Applications nationwide from Latino students rose by 6.4 percent, with applications from Mexican Americans up almost 8 percent. The number of Asian applicants increased to 7,286 from 6,737, an 8.1 percent increase over 2004. The number of African-American applicants was essentially unchanged at 2,809, and African-American enrollment declined slightly to 1,068 from the 2004 total of 1,086.

Erin Quinn, associate dean for admissions at the Keck School, said school officials are pleased with the diversity of this year’s class. About 16 percent of the new students are members of an underrepresented minority in medicine: African American, Mexican American, American Indian or Alaskan Native, Native Hawaiian, Puerto Rican, Cuban or other Latino.

Keck School of Medicine boasts its largest enrollment ever