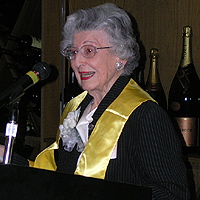 The California Social Welfare Archives hosted its annual awards luncheon and Hall of Distinction induction ceremony Nov. 1 at the USC Davidson Conference Center, honoring social work leaders across the state for their career accomplishments and commitment to the advancement of social welfare.

Feldman then presented the George D. Nickel Award for Outstanding Professional Services to USC School of Social Work professor Jacquelyn McCroskey. The award is given annually in memory of CSWA’s founder to recognize individuals who have made notable strides toward improving social welfare.

McCroskey, who holds the John Milner Professorship of Child Welfare, has an extensive record of service to the community. She serves as a commissioner of the First 5 L.A. Commission, which has allocated more than $1 billion for programs serving young children and families since its inception in 1999.

She was a founding member of the Children’s Planning Council, one of the nation’s most influential advocates for children’s services reform. She also serves on the County’s Child Care Policy Roundtable and the City of Los Angeles Commission on Children, Youth and Their Families.

Huerta, a community activist for 50 years, provided the keynote address, inspiring attendees with stories of her struggles on behalf of migrant farm workers and their impoverished families to receive fair wages and social service programs.

The CSWA also recognized nine inductees, including Feldman, into its California Social Work Hall of Distinction, which pays tribute to social work pioneers and other high-impact contributors to social welfare who support the profession’s values and code of ethics.

Feldman’s career encompasses scholarship, teaching and community service. USC has been a part of her life for more than 70 years, including 36 of them as a professor, teaching social welfare history, policy and administration. Prior to her academic life, she worked for 15 years in public and private social agencies as a caseworker, administrator, researcher and consultant.

She has authored 10 books and numerous book chapters and articles. Her most recent publication is “Human Services in the City of Angels: 1850-2000,” an institutional study of the role of the City of Los Angeles in human services. It was completed under the auspices of the Los Angeles City Historical Society and brought her the 2004 Wheat Award from the Southern California Historical Society.

In 2005, the USC Emeriti Center named her an Albert and Elaine Borchard Lecturer, an award that fosters the continuing service of retired USC scholars to society.

Worried about democracy? Concerned about inaccuracies regarding COVID-19? USC researchers share how all of us could assist in limiting the spread of misinformation.

LASER-D — Legged-Agile-Smart-Efficient Robot for Disinfection — can go most anywhere a person can go, disinfect the space and even check its work.

Business closures and partial reopenings due to COVID-19 could cost the U.S. trillions

As coronavirus infections spread throughout America, a USC study projects that the country stands to lose $3 trillion to $4 trillion in GDP over the next two years.