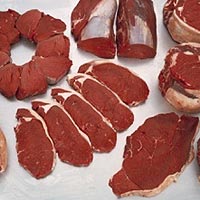 Some past studies have found that meat increases pancreatic cancer risks, while others have been less conclusive.

Eating red and processed meats increases a person’s risk of pancreatic cancer � but not necessarily because of the dietary fat, according to a team of researchers from the Keck School of Medicine of USC and the Cancer Research Center of Hawaii.

Instead, they said, the carcinogenic mechanism in meat may well have to do with the way that meat is prepared.

The findings were published in the Oct. 5 issue of the Journal of the National Cancer Institute.

Some past studies have found that meat increases pancreatic cancer risks, while others have been less conclusive.

To try to settle the question, Ute N�thlings from the Cancer Research Center and colleagues worked with data collected by the Multiethnic Cohort Study in Hawaii and Los Angeles � led by Keck School of Medicine Dean Brian E. Henderson � to see if a definitive pattern could be discerned.

Intake of pork, and of red meat in general, increased cancer risk by 50 percent.

To determine whether the higher fat content found in red and processed meats was responsible for the increase in risk, the scientists then looked at the risk of pancreatic cancer relative to a person’s intake of chicken, fish, dairy eggs and more.

They found no associations between pancreatic cancer risk and eating any of those foods.

And they found that “intake of total and saturated fat from meat was associated with statistically significant increases in pancreatic cancer risk, but that from dairy products was not.”

Since fat is not the cancer-causing culprit, the scientists point to known carcinogens that are produced during cooking (heterocyclic amines and polycyclic aromatic hydrocarbons) or preservatives (nitrosamines).

While these results were both “interesting and unexpected,” Henderson said, they still need to be further explored before any further recommendations can be made. “This is definitely a wait-and-see result,” he said.

“The results raise the possibility that individuals might reduce their risk of pancreatic cancer by reducing consumption of red and processed meats,” agreed the researchers in their JNCI article, adding that “future analyses of meat and pancreatic cancer risk should focus on meat preparation methods and related carcinogens.”