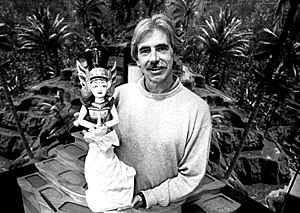 J. Stephen Lansing holding Dewi Sri, a Balinese rice goddess. Behind him is a panel from the current exhibit at the California Museum of Science and Industry that draws on his research.

Fantastical myths tied to age-old ritual practices first attractedanthropologist J. Stephen Lansing to the study of Balinese temples inthe 1970s. But it was an all-too-real agricultural crisis that ledhim to validate scientifically the pragmatic wisdom behind thoserites.

Inspired by the Green Revolution, consultants from the AsianDevelopment Bank were trying to discourage rice farmers from usingtemples to practice their supposedly backward “religion of holywater.”

Instead of conferring with priests over watering and plantingschedules, farmers were encouraged to embrace a $54 million scheme torevamp Bali’s agriculture with modern approaches to irrigation andnew strains of seeds, chemical fertilizers and herbicides.

Convinced that relief lay in a return to tradition, Lansing joinedwith USC ecologist and computer expert James Kremer and launched anexhaustive study of the ritual-laden approach to farming.

Where others had seen only superstition, the USC researchersquantified one of the world’s most balanced agricultural systems,which held pests in check naturally while replenishing soil,conserving water and supplying the Indonesian island with rice andother foodstuffs.

“[Westerners] divide experience into ‘ecology’ and ‘religion,'”Lansing said. “To the Balinese, it’s integrated.”

Thanks to this work, bank officials now encourage Balinese ricefarmers to coordinate the irrigation and planting schedules ofhundreds of scattered villages by meeting, as they have for more thana thousand years, in “water temples.”

With a string of new accolades and accomplishments, Lansing,continues to reap the seeds he sowed in Balinese rice fields.

A new book, a prestigious prize, a museum exhibit and a televisionspecial have turned up the spotlight on Lansing’s work in Bali, whichbegan attracting attention in the late 1980s.

On May 12, the anthropology professor received the J.I. Staley Prizefor the 1991 book that chronicles his findings – Priests andProgrammers: Technology of Power in the Engineered Landscape of Bali(Princeton University Press).

The Staley Prize is “the virtual Pulitzer Prize of anthropology,”according to a scholarly anthropology newsletter, and offers thefield’s richest award, $7,500.

Lansing was astounded to learn his book had received the StaleyPrize. “I didn’t even know I’d been nominated,” he said.

Established 10 years ago, the prize recognizes “innovative works thathave gone beyond traditional frontiers and dominant schools ofthought in anthropology and given new dimensions to our understandingof the human species,” according to the School of American Research,the Santa Fe-based think-tank that awards the honor annually.

In announcing the selection of Priests and Programmers for the prize,SAR president Douglas W. Schwartz said, “it’s an elegantly written,superb book based on brilliant analysis and solid theoreticalunderpinnings.”

The book explains how Lansing and Kremer set up a computer model thatsimulated hundreds of years of rice planting in search of the bestpossible strategy for the farmers.

To the researchers’ delight, the program found that the optimalsolution was virtually identical to the water temple system – whichentails elaborate pilgrimages and prayers but also requires farmersto meet each year to coordinate the irrigation of more than 200communities.

The computer program won the support of government and bankingofficials as well as farmers for a return to traditional agriculturalpractices.

Lansing was not surprised to find that these ancient rituals producesystems whose efficiency holds up under modern scientific scrutiny.

“I suspect this is a common thing in traditional societies,” he said.”Rituals may codify a trial-and-error process that comes down fromthe ages. These ancient traditions have wisdom we can learn from.”

Lansing and Kremer have also contributed to “Balancing Acts:Providing for Today, Preserving for Tomorrow” – an ecological exhibitthat opened, appropriately, on Earth Day (April 22) at the CaliforniaMuseum of Science and Industry, in Exposition Park.

Together, the USC scientists assembled three videos and severaldisplays to illustrate the Balinese irrigation system, in which weirsand catchment basins line the canals that flow from a single craterlake high above the stepped terraces.

The exhibit also features a reconstruction of a water temple – agazebo-like structure that stands at the fork of each irrigationcanal. Farmers meet in the temples to coordinate the coming year’splanting schedules for their subak, or community.

One video shows members of a subak planning to stagger plantings toconserve its water supply and cut off irrigation to fields overrunwith pests.

Another video shows subaks taking their plans to water templesprogressively farther upstream, so that each distribution accountsfor the needs of a range of communities.

The final video shows the rice farmers making their annual pilgrimageto make offerings to a goddess believed to inhabit the crater lake.There, priests consider the plans and needs of all the subaks anddevise a coordinated approach to planting and water distribution forall the paddies fed by the lake.

A diorama at the exhibit shows the rich ecosystem in the rice paddies- including eels, an important ingredient in Balinese cuisine;microorganisms that act as natural fertilizers; and ducks and othernatural predators that eat insects drawn to the crop.

Another display lets visitors play at being Balinese rice farmers.When they opt to coordinate planting schedules instead of workingindividually or planting all the fields at once, they are rewardedwith high praise.

Lansing’s research on Bali rice farming was featured in the April 19edition of “Human Quest,” a four-part PBS series that looks atrevolutionary advances in the study of the brain.

Putting computers at the service of explaining ancient rituals is “aparable for our modern times,” the PBS program explained.

Since 1992, he has been studying the impact of logging and ahydroelectric project on the Skokomish, a Native American tribe basedin Washington.

The tribe, whose name means “River People,” subsists on salmon, craband other fish that used to teem in the Skokomish River.

Using computer modeling and aerial photography, Lansing has been ableto document how the river’s fertility has plummeted under the controlof the National Forest Service and the impact of the hydroelectricproject.

“In Bali, we have rivers that have been used to grow rice,” Lansingsaid in the documentary. “In northwestern Washington, we have a riverthat produced salmon, shrimp and crab…. They both are complex,adaptive systems. Both are managed by human beings. The fates of bothare really in our hands.”

Lansing’s most recent scholarly effort is The Balinese (published byHarcourt Brace & Co.) – a 148-page textbook that covers the art,history, traditions and agrarian practices of the island.

“I’d read some books by Margaret Mead and her then-husband, GregoryBateson, and they made the place sound interesting,” he said. “Littledid I know how interesting it would turn out to be.”

A scientist’s defense of water worship