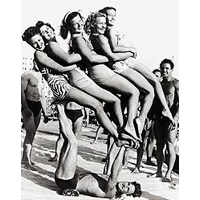 Russ Saunders shows how to pick up women during the heyday of Muscle Beach.

A rusting blue and white sign now stands along Santa Monica’s shoreline, marking the spot where countless copper-toned hard bodies once flexed their muscles beneath the California sun.

The original Muscle Beach is widely regarded as the birthplace of the 20th century’s physical-fitness craze. One of the most popular destinations of its day, the famed locale left behind a storied legacy for historians studying Los Angeles.

A recent acquisition by USC’s Specialized Libraries and Archival Collections of seldom-seen film footage provides an intimate, firsthand account � and photographic view � of how this small strip of sand became a haven for the beautiful and health-conscious.

In the 1930s and ’40s, it was a trendsetting spot where fitness icons such as Harold Zinkin, Joe Weider, Steve Reeves, Vic Tanny, Jack LaLanne and Joe Gold developed their physiques.

Thousands of spectators came to see the young men perform on weekends, and Muscle Beach soon eclipsed the Santa Monica Pier as the preeminent entertainment destination along Southern California’s coast.

As more observers became participants, bodybuilding and fitness became a part of the mainstream culture. Throngs of men and women lifted weights, built human towers and entertained the mesmerized crowds with somersaults and handstands.

Over the years, Muscle Beach attracted countless colorful characters, including Paula Boelsems and her waterskiing elephant.

Boelsems, a USC alumna, retired LAUSD teacher, former stuntwoman and 2005 inductee into the Muscle Beach Hall of Fame, donated to her alma mater the more than 15 hours of film � as well as more than 100 slides and 2,000 feet of audio recordings � relating to the Santa Monica hotspot.

Boelsems inherited the collection from her longtime colleague and friend, Russell M. Saunders.

“Mr. Saunders bequeathed his extraordinary collection to Mrs. Boelsems, who cared for it for several years,” said Dace Taube, a librarian who curates the collection for the USC Information Services Division’s Specialized Libraries and Archival Collections department.

“We are very grateful to Mrs. Boelsems for bestowing this extraordinary visual collection on USC. Historians and archivists can rejoice that Russell Saunders had the foresight to document on film the legendary men and women who trained their perfectly sculpted bodies to perform acrobatics and stunts,” she said.

Saunders shot most of the footage himself and was a renowned stuntman who doubled for many of Hollywood’s most famous actors, including Lloyd Bridges, Gene Kelly and Alan Ladd.

During World War II, Canadian-born Saunders served as a photojournalist with U.S. paratroopers in Europe, and after the war, briefly attended the USC School of Cinema-Television before appearing in films such as “Singin’ in the Rain,” “Shane” and “Seven Brides for Seven Brothers.”

Saunders also was Salvador Dali’s model for the painting “The Christ of St. John,” which hangs in the Glasgow (Scotland) Art Gallery and Museum.

He and Boelsems were among the first accredited U.S. judges for the International Federation of Sports Acrobatics.

A teacher and coach, Saunders worked for more than a decade on television’s “Circus of the Stars,” training Hollywood thespians for their acts on the show. Even into his 70s, he was still teaching gymnastics to youngsters on Sunday afternoons on the old Muscle Beach site. He died in 2001 at the age of 82.

“We need no further indication that the history of Muscle Beach is vital to understanding our state and region, than the fact that the current governor of California, Arnold Schwarzenegger, began his bodybuilding and movie career at a nearby Gold’s Gym in the 1970s,” explained Philip J. Ethington, professor of history and political science in the USC College of Letters, Arts and Sciences and the North American editor of the Urban History journal.

The halcyon days of the original Muscle Beach, however, faded almost as quickly as they began. The facility’s popularity began to wane in the 1950s.

After charges of sexual misconduct were filed against several weightlifters, Santa Monica city officials shut down Muscle Beach in 1959. Although the weightlifters later were exonerated, the city bulldozed the area, claiming it had become a magnet for “perverts” and “narcissistic parasites.” Several months later, the city reopened the area as “Beach Park 4.”

In 2000, Santa Monica officials erected a new recreational facility on the site of the old Muscle Beach platforms, complete with an open-air weight pit and a place for children to exercise. There were, however, no performance platforms or viewing stands rebuilt to restore the exhibitionist or entertainment side of Muscle Beach that was integral to what the beachfront was in its heyday.

“The Paula Boelsems collection is a remarkable addition to USC’s archival resources documenting the key sectors of Los Angeles,” Ethington said. “Some years ago, such materials as 16mm film documenting popular culture may not have been taken very seriously by historians, who treated manuscript collections as the gold standard for research.

“But the scholarly world has realized that visual culture was at the center, not the periphery, of the 20th-century world. That world was largely shaped by Californians and Angelenos, and there are few institutions better positioned than USC to take advantage of donations such as this.”

The housing, preservation and indexing of the Boelsems Collection is a collaborative project of USC Special Collections and the USC School of Cinema-Television’s Moving Image Archives.