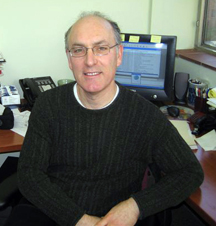 Marc Weigensberg is using the power of the mind to help kids battle obesity.

“It’s alarming—very alarming,” said Weigensberg, assistant professor of pediatrics at the Keck School of Medicine. “If children have this disease at this age and knowing what we know about diabetes complications, they are likely to face major mortality and morbidity at ages when they should be in the prime of life.”

So Weigensberg is testing the value of relaxation techniques as a way to help teen-agers deal with stress and the weight gain it may bring with it.

Among adults, he explains, scientists have shown that chronic life stress may increase secretion of the hormone cortisol, which encourages packing on fat around the gut—a risk factor for insulin resistance and type 2 diabetes.

In a pilot study underway at Women’s and Children’s Hospital, Weigensberg is testing various stress reduction techniques among 14-to-16-year-olds to see if relaxation reduces cortisol during adolescence. Once a week for four weeks, he teaches relaxation through breathing, much like methods used in yoga. He also helps the teenagers relax physically, and then shows them how to visualize a journey to a place that represents comfort and relaxation.

Both before and after the sessions, the teens’s cortisol levels are tested through saliva samples. Teens are encouraged to use the techniques at home, too.

“Family, school, money and health are all potential sources of stress for adolescents,” he said. “Young adults are experiencing more stress-related symptoms today than those in the 1950s.”

He hopes the study will lead to a broader study to evaluate the intervention.

Besides his relaxation study, Weigensberg also is a key player in several other USC efforts to study and remedy obesity in children. Most notably, he oversees medical care in several Keck School studies exploring insulin resistance among adolescents.

Through the long-term Study of Latino Adolescents at Risk of Diabetes, or SOLAR, Keck School researchers are following obese Latino children, ages 8 to 13, who have a strong family history of type 2 diabetes, to see if the children develop the disease.

“The goal in SOLAR is to identify which risk factors are particularly important for determining whether a child will develop diabetes,” he said. The study is led by Michael I. Goran, professor of preventive medicine and physiology and biophysics and associate director of the USC Institute for Prevention Research.

“It’s important that we understand the risk factors that lead to diabetes and are able to identify them early and intervene early enough to prevent it,” Wegensberg said.

He wants to give kids the tools to help themselves, too. Weigensberg is involved in the ongoing Strength Training Exercise in Adolescent Latinos to Improve Health (STEALTH) study, which explores whether weightlifting affects insulin sensitivity in Latino boys. “In 16 weeks of exercise, not only did boys feel successful and have improved self-esteem, but they decreased their insulin resistance,” he said. “It’s not because of weight loss but, rather, we think it’s some sort of action on the muscle to increase its utilization of glucose. Or it may indirectly affect whole-body insulin resistance.”

Outside of the STEALTH and SOLAR trials, which are funded by the National Institutes of Health, Weigensberg hopes to reach out to the county’s neediest kids by developing programs through the LAC+USC clinic so that even adolescents who are not involved in ongoing studies can benefit from the latest scientific findings. And there are many who need the help.

Noted Weigensberg: “We want to translate findings into programs that are available to all young adults.”