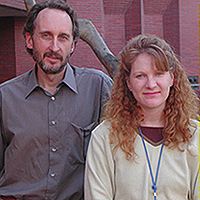 The rats in Alan Watts’ lab will not eat. Containers of dry kibble sit largely untouched in their cages.

Something is happening in their brains, something that makes them ignore the body’s pangs of hunger.

Watts, an associate professor of biological sciences in USC’s College of Letters, Arts & Sciences, studies rats in hopes of finding a biological switch that controls eating and drinking behavior.

His studies of anorexia were recently awarded a $1.5 million grant from the National Institute of Mental Health.

The experimental model Watts has developed takes advantage of the fact that rats become anorexic when they are dehydrated. Given fresh water to drink, the rats regain their normal appetites within minutes.

“Our model offers a window into the mechanisms that control eating behaviors in the brain, where in the brain these are located and how the complex behaviors involved in finding and ingesting food emerge,” Watts said. “It gives us clues about why and how appetite is suppressed in certain instances.”

While many details of the process remain a mystery – Watts is still unsure of the exact mechanism that inhibits appetite in the anorexic rats – his work holds promise for those who suffer from anorexia as well as for those who battle what he considers an even greater health problem – obesity.

One day, Watts believes his research may be relevant to the treatment of the most well-known type of anorexia, anorexia nervosa, which is complicated by a significant psychological component.

But for now, his model more closely mirrors other forms of anorexia, such as those common in the elderly and in patients with cancer, AIDS or end-stage renal disease, said Dawna Salter, a graduate student in Watts’ lab and a key collaborator on the anorexia studies.

For those already ill with another disease, losing even 10 percent of body weight doubles the risk of death, she said.

Before entering graduate school, Salter experienced the frustration of anorexia firsthand when she worked as a clinical dietician in a hospital.

She recalls bringing trays of food to sick patients who were quickly becoming malnourished, only to be told things like, “I’m so sorry, honey, but I’m just not hungry.”

“The problem with anorexia is that these people really don’t feel hunger, even when their body needs more calories to function,” she said. “Our hunger is turned on in the brain. In anorexics, there seems to be something inhibiting the normal signal from getting through.”

Watts’ current interest in feeding and anorexia came when he and his close collaborator (and wife), researcher Graciela Sanchez-Watts, developed a simplified animal model of stress, in which the researchers dehydrated rats by giving them saline water for a few days and studied the physiological changes in their brains.

The rats also offered a way to study the control of food intake: Compared to rats given access to fresh water, the dehydrated rats slowed down their eating by as much as 80 percent in an attempt to conserve their fluid balance.

Allowed to drink fresh water after three to five days, the dehydrated rats’ appetites returned surprisingly quickly and with gusto.

Intrigued, Watts began to look at hunger and anorexia.

The hunger that drives people and animals to eat is the result of a complex series of communications between body and brain.

Inside the brain, messages are carried by neurotransmitters and neuropeptides, which travel from brain cell to brain cell to relay signals such as “blood sugar dropping,” for example, or to stimulate appetite.

Scientists have shown that neuropeptide Y (NPY) plays an important role in the brain by stimulating eating. Other molecules apparently involved in metabolic control and feeding behavior include the appetite stimulator ghrelin, and inhibitors leptin, PYY and cholecystokinin.

In earlier studies, Watts’ team showed that the brains of the anorexic rats look similar in many ways to a control group of calorie-restricted rats given the same amount of food to eat.

The calorie-restricted control group ensured that any effect scientists saw was a result of the loss of appetite and not due to effects of undernourishment. Both groups had elevated levels of NPY gene expression when compared to a control group of normal rats, which were given free access to food and fresh water.

In a key paper published in the Journal of Neuroscience in 1999, Watts and Sanchez-Watts searched for more differences between the groups and found that the anorexic rats had increased expression levels of the gene for corticotropin-releasing hormone (CRH), which, among other functions, suppresses appetite when injected directly into the brain.

Recent studies by Watts and Salter offer more support to a hypothesis that the loss of appetite seen in anorexia occurs through an active blocking of the appetite-stimulating molecule NPY.

One experiment looked specifically at eating signals mediated by NPY, including overnight starvation and the rapid lowering of glucose availability in the brain. Dehydration blocked even these strong triggers of feeding behavior in the anorexic rats, in comparison to normal and calorie-restricted controls.

The decrease in glucose availability also has other effects that NPY plays no role in, including activating a neuroendocrine response that leads to an immediate rise in blood glucose levels and the release of glucocorticoid hormone by the adrenal glands.

From these findings and other evidence, Watts has fingered CRH as the leading suspect in blocking the anorexic rats’ drive to eat. His team is now testing this hypothesis, as well as trying to locate the individual neurons involved and diagramming the neural pathways.

“We all eat, but some of us overeat while others get anorexia,” said biologist Larry Swanson, director of the USC Neuroscience Graduate Program, who first mapped the neural circuits involved in ingestive behaviors. “If we know which brain circuits control hunger and how, we may be able to correct these problems.”

Between Body and Brain