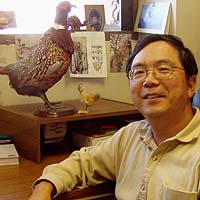 Cheng-Ming Chuong, professor of pathology in the Keck School of Medicine of USC and principal investigator on the study.

The stem cells that produce bird feathers have been visualized and analyzed for the first time, signifying the initial step in a scientific journey that ultimately may shed light on human organ regeneration.

The research, published in the Dec. 15 issue of the journal Nature, was performed by a group of prominent stem-cell researchers from the Keck School of Medicine of USC.

“What we found is that feather stem cells are distributed in a ring configuration around the inner wall of the vase-shaped feather follicle. This is different from hair stem cells, which are located in a bulge outside the follicle,” said Cheng-Ming Chuong, professor of pathology in the Keck School and principal investigator on the study.

Feather stem cells are of interest to scientists because of their profound regenerative abilities. A bird in nature molts twice a year. With more than 20,000 feathers on the average bird, Chuong noted, there are a lot of active, ongoing regenerative events in an adult bird.

These stem cells, the researchers found, are well protected in the follicular base of each individual feather follicle. As they proliferate and differentiate, their progeny are displaced upward to create a feather. When the bird molts, the quill of the feather is dislodged from the follicle with a tapered proximal opening � the very feature that historically has made feathers so useful as writing implements � leaving behind a ring of stem cells for the creation of the next generation of feathers.

“The unique topological arrangement of stem cells, proliferating cells and differentiating cells within the feather follicle allows for continuous growth, shedding and regeneration of the entire organ,” Chuong said.

What Chuong and his colleagues found, to their surprise, was that the orientation of the ring of feather stem cells is related to the type of feather being generated: the stem cell ring is horizontally placed in radially symmetric downy feathers, but is tilted in bilaterally symmetric feathers, with the lower end of the ring on the anterior side of the follicle, where the rachis � the backbone of the feather � arises.

In the Nature paper, Chuong postulates that it is this simple tilting that can transform feathers from radially symmetric to bilaterally symmetric morphologies by producing molecular gradients and/or asymmetric cell behaviors.

While this insight into the formation and regeneration of feathers is fascinating, it is the potential for application to human stem-cell studies that really motivates Chuong and his team.

“What we are really learning about is how stem cells are assembled into organs in nature. In this way, we can take advantage of the distinct patterns of the feather as a model to understand the fundamental principles of organ formation and regeneration,” Chuong said. “Nature is the best teacher for tissue engineering. What we decipher from our animal models can then be applied to help human stem cells and adult human organs to regenerate � and regenerate properly.”

From Feathers to Regeneration