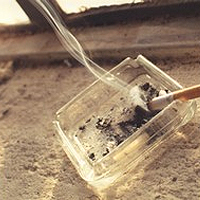 In the study, researchers examined a gene linked to the body’s inflammatory response to chemicals such as those found in second-hand smoke.

Children with a certain genetic makeup are at heightened risk of chest infections and other respiratory illnesses due to second-hand smoke exposure, according to researchers from the Keck School of Medicine of USC.

Writing in the Dec. 15 issue of the American Journal of Respiratory Critical Care Medicine, the scientists report that children who have a variation in a key gene and who live in a home with smokers are four times more likely to miss school days because of lower-respiratory illness than children who are free from the variation and live in smoke-free homes.

The study points to a clear public health message, said Frank D. Gilliland, professor of preventive medicine in the Keck School of Medicine and senior author of the study. “Parents or others who choose to smoke around children are causing illness and school absences, potentially affecting how well the children do in school.”

In the study, researchers examined the gene called tumor necrosis factor (TNF) alpha. This gene is linked to the body’s inflammatory response to chemicals such as those found in second-hand smoke. About 24 percent of the children had a variation in at least one of their two copies of the TNF-alpha gene.

The team based the paper on data from the Children’s Health Study, a long-term project monitoring air pollution and children’s lung health in a dozen Southern California communities. For this segment of the study, researchers focused on school absences among 1,351 fourth-graders at 27 elementary schools in 1996.

They collected a variety of information about the children, from their history of asthma, if any, to their exposure to smoking and allergens. They also collected school absence reports and took DNA samples from the children.

The group found that 20 percent of children lived with second-hand smoke, and nearly 6 percent of children lived with two or more smokers. Children who breathed second-hand smoke at home were 51 percent more likely than those in non-smoking homes to call in sick from school due to a lower-respiratory illness, regardless of their genetic makeup. But smoke’s influence was even more pronounced when researchers began looking at TNF-alpha.

The researchers found that children who had the “A” variation � either the “AA” or “AG” genotype � were more vulnerable to the effects of second-hand smoke.

Children with the “A” variation who were exposed to smoke at home were 75 percent more likely to be absent from school due to illness of any kind compared to children in smoke-free homes who had the “GG” genotype.

The effect became pronounced when it came to respiratory illness.

Children with the “A” variation who lived with two or more smokers were twice as likely to miss school due to a respiratory illness compared to “GG” children who lived in smoke-free homes. And the effect was particularly strong for lower-respiratory illness, such as chest infections.

Children with the “A” variation who were exposed to two or more smokers were four times as likely to stay home due to lower-respiratory illness than were unexposed children with the “GG” genotype.

Previous research has shown that exposure to second-hand smoke increases the occurrence and severity of breathing problems, respiratory infections, visits to a doctor or emergency room and even hospital admissions. These issues, as well as increased school absences, combine to pose large economic costs, Gilliland said.

Although the study was not designed to explain why genetic differences affect children’s response to second-hand smoke, researchers have some ideas.

Chemicals found in cigarette smoke promote oxidative stress, which is involved in numerous inflammation processes in the body. TNF-alpha plays a role in those processes, and researchers suspect that variations in the TNF-alpha gene might intensify the body’s inflammatory response.

“Once we are able to identify those who are genetically more susceptible to the effects of second-hand smoke, we may be able to develop intervention strategies to reduce exposure among those who are at greatest risk,” said David A. Schwartz, director of the National Institute of Environmental Health Sciences.