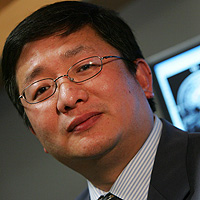 “Amblyopia is sometimes due to a misaligned eye that can be reoriented surgically. But in many cases the eye is perfectly healthy,” said study co-author Zhong-Lin Lu.

Young adults with amblyopia, or lazy eye, can improve substantially and retain their gains under a new treatment developed by researchers at USC and three Chinese universities.

A lazy eye in children appears normal but cannot see properly, even with corrective lenses. If untreated, the eye will not develop normally, resulting in permanent loss of vision.

Amblyopia has been considered incurable in individuals older than eight. The new study, published online this week by Vision Research, documented a 70 percent improvement in eye chart performance in 19-year-old subjects. The average one-year retention rate was 90 percent.

The researchers trained the subjects in detection of a small “gabor” (pronounced ga-bor), a set of three contrasting dark and light ovals that neurophysiologists have identified as a basic unit of visual perception.

Surprisingly, improvement in this abstract exercise generalized to a marked improvement in standard vision tests. The seven subjects improved their overall visual acuity 25 to 216 percent, with an average of 70 percent.

“Detecting simple visual patterns turned out to be quite useful for improving visual acuity for amblyopia patients, typically measured by eye chart reading,” said co-author Zhong-Lin Lu, professor of psychology in the USC College of Letters, Arts and Sciences and co-director of the Dornsife Neuroscience Imaging Center.

Normal subjects who received the same training did not show a general improvement in vision. A possible reason may be that a little stimulus goes a long way toward awakening the amblyopic eye, Lu said.

Amblyopia is sometimes due to a misaligned eye that can be reoriented surgically. But in many cases the eye is perfectly healthy, said Lu, who added, “The problem is actually in the brain. This is a neural deficit.”

Next, the researchers plan to test their method on patients at a clinic in China. Other plans include developing a home training program.

“It could become a clinical procedure,” Lu said.

In addition to USC, the paper’s co-authors come from the University of Science and Technology of China, Anhui Medical University and the Chinese Academy of Sciences.

Adults With Lazy Eye Can Improve