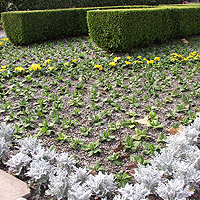 Red and yellow primrose and ‘Silver Dust’ Dusty Miller were visible in the main planter bed in Alumni Park shortly before winter break.

Campus landscapers are like floral set designers, timing their colorful displays for maximum impact, then shooing the wilted blossoms away before the next duet of foliage and flowers.

Shortly before winter break, for example, red and yellow primrose and ‘Silver Dust’ Dusty Miller were crisscrossed around the box hedge “USC” letters in the main planter bed in Alumni Park.

The pattern was designed to add interest, but not be overly busy, said Lupe Mercado, one of the two supervisors for the Buildings and Grounds landscape shop who worries about such details.

The planting was done Dec. 15, scheduled so the blooms would be making their entrance Jan. 9 � “the day our customers come back,” Mercado said.

The new blooms replaced the poinsettias placed around Bovard Auditorium and Hahn Plaza for the holidays, which will be quietly removed after the new year.

The two supervisors are always on the prowl for red, burgundy and yellow specimens that are true to the USC colors. Durability is a plus. So when a hardy burgundy Salvia vanhouttii became available, the two pounced on it. It’s a truer USC color than the traditional red salvia that tends to look too orange, Mercado said.

The duo has some tried-and-true favorites � bronze-leafed red ‘Vodka’ wax begonias, mixed New Guinea impatiens and the workhorse ‘Bonanza Yellow’ marigolds. ‘Bonanza Yellow,’ a semi-dwarf variety, is so reliable and useful that it sees action at least twice a year.

At commencement time, the blossom combination will be the ‘Bonanza Yellow’ marigolds and the burgundy salvia.

As bicycles, vehicle tires and thousands of feet take their toll, evergreen ground covers are used as foundation plantings in high-traffic areas. There’s tough English ivy or drought-tolerant ‘Green Carpet’ natal plum. The latter, a shrub trimmed to about eight inches, has nasty thorns, a natural impediment to anyone attempting to cut across a lawn.

And what about ivy-covered walls? The landscape chiefs don’t care much for that traditional concept. “We don’t want crawlers,” Mercado said. “They attract rodents.”

Meet a Pair of Late Bloomers