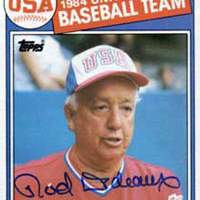 A portion of a Topps trading card signed by Rod Dedeaux in honor of the 1984 Olympics.

Legendary USC baseball head coach Raoul “Rod” Dedeaux, who led the Trojans to a record 11 national championships, coached nearly 60 future major leaguers and was an ambassador for baseball’s international popularity, died Thursday, Jan. 5 in Glendale, of complications from a stroke that he suffered Dec. 2. He was 91.

A memorial service will be held on campus this spring at Dedeaux Field at a date to be announced.

“A giant has passed away,” said USC Athletic Director Mike Garrett, who was an outfielder for Dedeaux in 1965. “This is a tremendous loss to USC and the entire baseball community. It leaves a huge void in all of baseball. From Coach Dedeaux, I learned how to win and how important it was to win in any sport. For him, winning was a way of life.”

Current USC baseball Head Coach Mike Gillespie, who was an outfielder on Dedeaux’s 1961 national championship squad, said, “Rod not only was college baseball’s greatest coach, he was the sport’s � and USC’s � greatest ambassador. His passing is felt by all Trojans. All of us in the USC baseball program mourn his loss and send our heartfelt feelings and prayers to the Dedeaux family.”

USC President Steven B. Sample said, “Rod Dedeaux has been a part of USC for more than 70 years, as an alumnus, as a Trojan parent and as a legendary baseball coach who mentored and inspired generations of young men, both on and off the field. He was beloved by fans, colleagues and other coaches, and he will be greatly missed.”

In his 45-year tenure at USC (1942-86), Dedeaux led the Trojans to 11 College World Series crowns and 28 conference titles. He posted an overall collegiate record of 1,332-571-11 for a .699 winning percentage. He retired with more wins than any other college baseball coach (he currently ranks seventh among Division I coaches). After retiring, he served as USC’s director of baseball.

His teams won five straight NCAA championships from 1970-74. No other school has won more than two in a row.

Dedeaux was named Coach of the Year six times by the American Baseball Coaches Association and was inducted into the organization’s Hall of Fame in 1970. He received the ABCA’s Lefty Gomez Award in 1980 as “an individual who has distinguished himself among his peers and has contributed significantly to the game of baseball locally, nationally and internationally.”

In 1989, he was awarded the U.S. Baseball Federation’s W.P. “Dutch” Fehring Award of Merit for outstanding service.

Legend has it that the glib, extroverted Dedeaux, who called everyone “Tiger” and wore the now-retired No. 1 jersey, coached at USC for an annual salary of $1. His teams were known not only for their stellar play on the field, including their penchant for late-inning rallies, but for the fun they had while playing. His Trojans, who were spirited bench jockeys, sang “McNamara’s Band” after every victory. Rookies had to take turns wearing a famous red wig on road trips.

In recent years, Dedeaux, who was a sought-after master of ceremonies and devoted much of his time to charitable, religious and community groups, walked with the aid of a cane shaped like a baseball bat; it was signed by numerous baseball Hall of Famers and even some U.S. presidents.

Besides making a mark with the collegiate game, Dedeaux also spearheaded the development of amateur baseball nationally and internationally. He was instrumental in bringing baseball to the 1984 Olympics in Los Angeles as a demonstration sport and coached the silver medal-winning U.S. team. He also coached the U.S. amateur team that played in Tokyo in conjunction with the 1964 Olympics.

Dedeaux founded the USA-Japan Collegiate World Series in 1972. He served as Series Chairman from 1972 to 1984 and then was chairman emeritus. Dedeaux also was honored in May of 1996 by the Japanese government with the Fourth Order of Merit � Cordon of the Rising Sun award.

Hollywood enlisted Dedeaux’s expertise as well, inviting him to serve as a technical director and consultant for two highly successful movies: “Field of Dreams” and “A League of Their Own.”

Dedeaux served as president of Dart Transportation, Inc., a million-dollar trucking firm that specializes in worldwide distribution. He founded the company in the 1930s.

Dedeaux played baseball at USC and was a three-year letterman as the starting shortstop from 1933-35, earning All-Coast honors his last two seasons and serving as team captain as a senior. USC won its first-ever conference title in 1935. He received his bachelor’s degree in business in 1935 from USC, where he was president of the Delta Chi fraternity.

He played two games in the majors with the Brooklyn Dodgers in 1935 (going 1-for-4 at bat) before a back injury ended his playing career several years later.

He was an All-Mid Atlantic League shortstop that season with the Dodgers’ Dayton farm club, where he batted .360. He played with Hazelton in the New York/Pennsylvania League in 1936, but could not finish that season and sat out 1937 because of the back injury. He then played in 1938 and 1939 with the Pacific Coast League Hollywood Stars, Los Angeles Angels and San Diego Padres.

USC’s baseball field (Dedeaux Field) was named after him when it opened in 1974.

Dedeaux was born Feb. 17, 1914, in New Orleans, then moved to California as a youngster. He earned All-City honors as the starting shortstop for Hollywood High in 1930 and 1931.

Dedeaux is survived by his wife, Helen, sons Justin and Terry and daughters Michele and Denise, and nine grandchildren, including USC freshman first baseman/outfielder Adam Dedeaux.

In lieu of flowers, the family has asked that donations be made to the Rod Dedeaux Foundation, which promotes amateur athletics, at 1430 S. Eastman Ave., Los Angeles 90023.