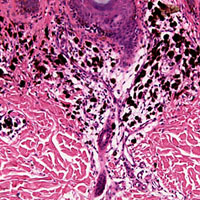 “This is a disease that has a great chance of cure when found early,” said lead author Myles Cockburn, assistant professor of preventive medicine in the Keck School.

Hispanics in California are increasingly being diagnosed with melanoma, a potentially deadly form of skin cancer, according to a study in the March 1 issue of the journal Cancer, published online Jan. 23.

Since 1988, rates of invasive melanoma have been growing among Hispanic men, according to researchers from the Keck School of Medicine of USC. And more alarmingly, rates of thick tumors in particular � those with a poorer prognosis � have been rising among both Hispanic men and women.

“When a tumor is thick, that usually means it has been developing for a while,” said lead author Myles Cockburn, assistant professor of preventive medicine in the Keck School. “This is a disease that has a great chance of cure when found early, and routine screening can catch early cases. But in this population, the cancer is becoming more common, and it’s not being caught early enough.

“We believe that efforts must be undertaken immediately to educate Hispanic communities about how to prevent melanoma: not only reducing sun exposure, but getting regular skin examinations and monitoring their own skin for suspicious lesions.”

Because nearly 12 million Hispanics live in California, the state provides researchers the unique ability to study how cancer affects this group. California also has one of the world’s highest rates of melanoma. These factors allowed the researchers to conduct this first-of-its-kind study.

When they analyzed 14 years of data, the researchers found something they already suspected: that invasive melanoma was increasing significantly among non-Hispanic whites (more than 3 percent a year). But Hispanics’ rates were rising too � a surprising finding, because most melanoma research has focused on non-Hispanic whites, who have the highest melanoma risk.

Hispanic men experienced nearly a 2 percent annual increase in the rate of melanoma over the 14 years. Researchers observed that invasive melanoma increased among Latinas by less than 1 percent a year, but that increase was not statistically significant.

“What gives us pause is not just the increase in the melanoma rate among Hispanic men, but the fact that between 1996 and 2001, the rate actually rose by more than 7 percent annually,” Cockburn noted. “That indicates that the problem may be worsening.”

Moreover, the researchers found that among both Hispanic men and women, thick lesions were becoming far more common than expected. While tumors thicker than 1.5 mm accounted for about 24 percent of non-Hispanic white men’s melanomas, they comprised about 35 percent of tumors among Hispanics.

Although researchers have reported widely on the usefulness of sun avoidance education and routine screening in preventing melanoma among whites, little is known about the success of prevention techniques among Hispanics. Yet, Cockburn noted, the few studies that exist point to a breach in melanoma-prevention practices.

Two studies have shown that Hispanics had a poorer awareness of skin cancer risk factors and of their own risk than whites, even though other research has shown that Hispanics are just as prone to sunburn as are whites. (Sunburn is a measure of the amount of sun exposure that is enough to produce a response in skin and probably contributes to melanoma).

And in a recent comparison of skin cancer prevention techniques, more than twice as many non-Hispanic whites had performed a skin self-exam in the past year compared to Hispanics.

The American Cancer Society recommends everyone receive a skin cancer examination by a physician once a year. In addition, the group recommends monthly skin self-exams in front of a full-length mirror to spot any unusual or growing moles or lesions.

“The word needs to get out about the importance of skin cancer checkups and routine screenings,” Cockburn said, “as well as sun avoidance, in Hispanic communities.”