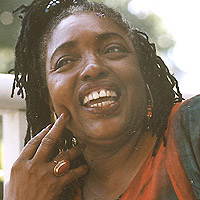 Holland was a playwright-in-residence at the USC School of Theatre.

Endesha Ida Mae Holland, an award-winning dramatist whose play “From the Mississippi Delta” was nominated for a Pulitzer Prize in 1988, died Wednesday, Jan. 25, at a nursing facility in Los Angeles where she had been battling a degenerative neurological condition. She was 61.

Holland joined the USC faculty in 1993, where she was a playwright-in-residence at the USC School of Theatre. She held the university’s first joint appointment between USC College (in its Study of Women and Men in Society) and a professional school.

She was a playwright, poet and essayist, as well as a pro-education activist who presented one-woman dramatic readings throughout the United States until her teaching career was cut short. Holland took early retirement in 2003 and was named Emeritus Professor.

Before joining USC, Holland was an associate professor in the Women’s Studies Program of the American Studies Department at the State University of New York at Buffalo.

USC President Steven B. Sample said, “I am deeply saddened by the death of my friend and colleague Dr. Endesha Ida Mae Holland. She was an extraordinary woman and a gifted playwright. I knew when I recruited her from the University of Buffalo that she would enrich the fabric of our university and the lives of our students. She always insisted that ‘Dr.’ appear with her name because she truly valued her education. We will miss her incredible spirit.”

Robert R. Scales, former dean of the USC School of Theatre, said, “Although Dr. Holland and I began worlds apart, we came to USC at the same time and found we shared common experiences, both earning our Ph.D’s at the University of Minnesota, though at different times. We enjoyed talking about many things, and I believe we became most close when, as dean of the school, I had to convince her that her health would no longer permit her to be a teacher in the classroom. She had a stubborn, courageous, fearless, adventuresome, caring soul, who under any hardship found joy and pleasure in living.”

Holland’s indomitable spirit and determination enabled her to rise from poverty to professorship and to overcome the tragic circumstances of her early years in Greenwood, Miss. Her play, “From the Mississippi Delta,” began as a one-woman dramatic reading. It is stitched together with threads from her own life � scenes of 1940s life in a wooden shack, her strong-willed midwife mother Ain’t Baby � who died in a house fire set by the Ku Klux Klan � and her own rape at the age of 11. A foray into teen-age prostitution followed, but her eventual involvement with the 1960s civil rights movement changed her life.

She wandered into the Student Nonviolent Coordinating Committee local headquarters in pursuit of a “John.” Robert Moses of SNCC was in desperate need of help from literate local people to help bring the civil rights movement to Greenwood.

Although she was a school dropout, Holland was bright and fearless and soon found herself becoming a leader in her community for the cause. After being introduced to Martin Luther King, she began to tour the north on behalf of the SNCC. But in the wake of her victories as an activist, tragedy stuck. A fire-bomb � rumored to have been the work of the Klan � tore through Holland’s Greenwood home, taking the life of her beloved mother.

In 1965, Holland left the Mississippi Delta determined to get a high school equivalency, enter college and go on to earn a doctorate. The educational journey took her 20 years, and Holland often encouraged others to take that first step. She once said she would never forget the help she received.

When she had nothing to wear to college, the president of the National Council of Negro Women sent her a check to buy clothes. Holland grew from a youngster who didn’t know that a black person had ever written a book to a vociferous pro-education activist.

In 1979, Holland gave herself a Swahili name � Endesha � which means One Who Is a Driver.

“From the Mississippi Delta” earned Holland a Pulitzer Prize nomination in 1988. The play also received the 1988 Audelco Playwright’s Nomination and the 1990 Drama-Logue Theatre Award and was performed at the Young Vic in London in 1989.

Holland earned her bachelor’s degree from the University of Minnesota in 1979, majoring in Afro-American Studies. She received her master’s and Ph.D. degrees, respectively, in 1984 and 1986 in American Studies from the same university.

Holland’s life-affirming plays chronicle the courage and spirit of black Americans who fight for equality. But her entry into the theatrical world was serendipitous � she intended to sign up for an acting class, but transposed two numbers and ended up, instead, in one on advanced play writing. Her career was born.

The playwright’s numerous awards attest to her commitment to social justice, spirit of community and academic and creative achievements � and of encouraging those traits in others.

Holland’s other plays include “Fanny Lou” (1984) and “Requiem for a Snake” (1980). She wrote articles for The Michigan Quarterly Review and Ms Magazine, among others, and in 1997, her autobiography, “From the Mississippi Delta,” was published by Simon & Schuster.

An archive of her work, awards and papers are part of the Givens Collection at the University of Minnesota Library.

She was a member of the Dramatist Guild, the International Black Women’s Congress, Association for the Study of Classical African Civilization and the Black Theatre Network. She was a founding member of the International Women Playwrights Center and was founder and chairwoman of the Ida Mae Holland Educational and Artistic Scholarship Fund, both in Buffalo, N.Y.

Holland is survived by her sister, Jean Beasley; a son, Cedric; a brother, Charlie Nellums; and a granddaughter, Kashka.

Plans are under way at USC for a celebration of her life.

Donations may be made to the Bob Allison Ataxia Research Center at the University of Minnesota and mailed to the Minnesota Medical Foundation, 200 Oak St., Southeast, Suite 500, Minneapolis, MN 55455-2010. Donations also can be sent to the USC School of Theatre Playwriting Program, ATTN: Cindy Young, 1014 Childs Way, First Floor, Los Angeles, CA 90089-0591.