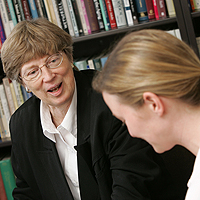 Alzheimer disease has a genetic cause in up to 80 percent of cases, according to a USC-led study of nearly 12,000 twin pairs.

The study appears in the February 2006 issue of Archives of General Psychiatry, a journal of the American Medical Association.

Margaret Gatz, professor of psychology in USC College, led an international team of researchers from Göteborg University, Jönköping University and Karolinska Institutet in Sweden, as well as from USC, the University of California at Riverside and the University of South Florida.

Past estimates of Alzheimer’s risk varied widely, with the highest numbers sometimes greeted with skepticism.

“Our finding confirms the higher estimates that have been suggested previously. The important thing is that no one has had this large a sample before,” Gatz said, adding the size was 10 times that of any previous study.

The study raises doubts about the widely held view that Alzheimer’s has two forms: the “familial,” with genetic roots, and the “sporadic,” with environmental causes.

Gatz warned, “This doesn’t mean that environment is not important. Environment may be relevant not only for whether but also for when one gets the disease. Also, you can’t go from these results to any one individual.”

Even identical twins, who share all their genes, differ in their vulnerability. The study found only a 45 percent concordance rate for identical male pairs. This means that of all pairs where one twin has Alzheimer’s, 55 percent of the healthy twins either will never get the disease or will develop it later in life.

In her previous research with twins, Gatz identified possible preventive or delaying factors, such as a low incidence of inflammatory disease or a work environment with a high degree of human interaction.

The sample for the study consisted of all participants in the Swedish Twin Registry aged 65 or older in 1998 — the year the study began — for a total of 11,884 twin pairs.

Of these, 392 pairs showed evidence of Alzheimer’s in at least one twin.

In the model that best fit the data, genetic influence accounted for 79 percent of Alzheimer’s risk, with 95 percent confidence in a range of 67 to 88 percent.

The other 21 percent of Alzheimer’s risk was due to non-shared environmental causes. Risk from shared environments, such as childhood settings that were the same for both twins, was statistically negligible.

Genetic risk for Alzheimer’s was the same for men and women after controlling for age.

The study is notable for its careful approach to Alzheimer’s diagnosis. All individuals were screened for cognitive dysfunction. Suspected cases of dementia, of which Alzheimer’s is the most common form, received complete, in-home clinical diagnostic evaluations by a doctor and nurse. Autopsy confirmation of diagnoses is being collected.

The research for this study was supported by grants from the National Institute on Aging and the Alzheimer’s Association.

The other USC researcher on the study was co-principal investigator Nancy Pedersen, a research professor with a joint appointment as professor at Karolinska Institutet.

Alzheimer’s Found to Be Mostly Genetic