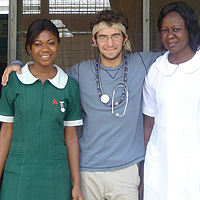 Fima Macheret is flanked by two of his nurses at the African clinic.

Chemical engineering student Fima Macheret wanted to do “something meaningful” during his summers, something that would give him hands-on experience in medicine.

So before the start of the fall semester, he embarked on a journey of hope and goodwill in the small fishing village of Prampram, on the west coast of Africa.

“I’m going to medical school in a few years, so I wanted to work in a part of the world that really needs help,” said the USC senior, who is specializing in biochemical engineering.

He couldn’t have landed in a more remote corner of the world. Prampram is a poor village located an hour from Accra, Ghana’s capital. The town has a population of about 6,000 people. Macheret said it is also known as “Gbugbla,” which means to “keep on trying.”

For three weeks, Macheret kept on trying. As part of a team from Global Volunteers, he helped nurses in the village clinic administer shots and medicines to local residents.

Global Volunteers sends teams of volunteers to sites worldwide, including the United States, to work on projects ranging from teaching English and assisting with health care to constructing community buildings.

“The clinic staff quickly became both my teachers and my colleagues in that they were excited to teach me their techniques, but also eager to know my opinion on various issues,” said Macheret, who hopes to graduate in May.

“International health care has a long way to go, but through hard work, responsibility and international effort, it will improve,” he added.

The young engineering student saw a variety of patients, 75 percent of whom had malaria and were suffering from high fevers and body aches.

Other villagers came to the clinic with work injuries � cuts, scrapes and sprains � while a few came in with injuries caused by domestic violence.

“I started giving injections the first day I was there,” he said. “I learned that their babies had very leathery skin; it was hard to puncture the skin with a hypodermic needle.”

Fifteen nurses staffed the clinic, but they didn’t have much more than basic first aid supplies, vaccinations and generic medicines to work with, Macheret said. The nearest hospital was a half hour away, so most of the ailing residents sought out the clinic for medical attention.

Marcheret said six or seven volunteer teams from Global Volunteers work three-week stints in the village each year. Quite often, they bring some of the basic medical supplies with them. Those volunteering in the clinic learned how to dress wounds, take blood pressure and apply tourniquets before administering an IV of saline solution to dehydrated patients.

While Macheret helped out in the village clinic, other volunteers taught conversational English and other subjects in village classrooms.

The volunteers were given “rock star treatment” everywhere they went in Prampram, he said, with throngs of children running up to greet them and villagers always waving hello every time they arrived.

The volunteers were honored at one point with an invitation to a meeting of the traditional council of the Prampram area, during which they presented the council with 20 boxes of donated books.

“I was very happy about that because they had a very good library in town,” Macheret said. “I was really surprised to find a chemical engineering textbook there.”

Macheret also assisted on school painting projects. Over the course of a few weeks, he had struck up friendships that transcended geopolitical boundaries. But Emmanuel, a young soccer player on the city team who had bigger ambitions of playing in the nationals, stole his heart.

“Emmanuel ran on the beach for two hours each morning,” Macheret said. “He was so inquisitive and had so many questions about everything. I think one of the best things I did while I was there was to help him set up an e-mail address. And now that he knows how to do that, he’ll be able to teach others in the village how to get online.”

During their free time, the volunteers watched the fishing boats come home in the afternoon and joined in other community rituals. They also visited the homes of community members and learned to cook local dishes. And they learned that everyday life in Prampram is difficult.

Too many residents struggle to achieve even a minimal standard of living, Macheret explained. The fishing industry is unpredictable, unemployment is high and education is still inconvenient and inaccessible for many.

Once part of the powerful Ashanti empire, Ghana figured prominently in one of the most tragic chapters of Western history: the African slave trade. In colonial forts perched along the Ghanaian coastline, countless Africans were imprisoned until their departure on slave ships bound for the New World. The volunteers had the opportunity to visit these sobering sites.

Macheret, who started a student volunteer group at USC called “Cry for Freedom,” plans to spend the spring semester “actively recruiting USC students to undertake a similar trip next summer.”

Macheret said the volunteer group, co-founded by his friend and fellow USC student Jon Turco, is dedicated to freedom from inequality in health care and education.

“I hope we can organize a fund raiser to raise some money for those who want to go,” he said. “It’s a great way to apply your education and to learn what it’s like in other parts of the world. It really does transcend any learning experience I’ve had so far.”

With Wedlock of the Gods, professor brings Nigerian storytelling and culture to USC’s main stage

The production, which featured a nearly all-Black cast of students from the USC School of Dramatic Arts, celebrated the work of playwright Zulu Sofola.

Is L.A. like a city built on Jell-O? Chukwuebuka Nweke may have the answers

The new USC Viterbi assistant professor seeks to make our cities more resilient in the face of natural disasters.