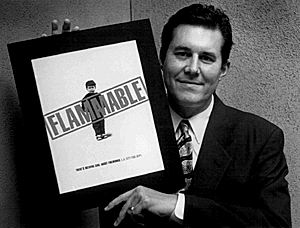 USC advertising and business lecturer Larry Steven Londre, with the 1995 installment of the “There’s Nothing Cool About Fireworks” national media campaign.

The experience that alarmed and angered the veteran ad man – a senior lecturer in marketing and advertising at USC – also set his creative juices flowing.

Eleven years later, his campaign “There’s Nothing Cool About Fireworks” is as hot as ever. In fact, fire officials credit it with a 56 percent drop in injuries from fireworks.

“Rarely in advertising do you get a chance to save someone’s life,” Londre said. “But we have with this campaign.”

Memorable ads in the series include “Fireworks Create Memories That Last a Lifetime,” which shows a girl blinded by fireworks; “Burned on the 4th of July,” in which a home is engulfed in flames; and, perhaps most poignant of all, “4th of July” spelled out with the bandaged hand of a four-fingered child.

Londre long ago delegated the responsibility for developing the searing imagery and five-alarm copy, which changes every other year.

For the past six years, the advertisements have been designed by Fattal & Collins, a Marina del Rey agency where Londre was senior vice president in 1987 and 1988.

But Londre, who now operates his own agency and consults for a division of GE, still rolls up his sleeves each year to coordinate the campaign at no cost to taxpayers.

He estimates that, over the years, he has persuaded more than 100 companies and individuals to donate goods and services for the five-week summer campaign.

In an effort that spans nine months of the year, Londre woos printing companies, photographers, actors, television stations, magazines and such billboard companies as Gannett Outdoor to work for free.

“We’re looking at several hundred thousand dollars each year, which, of course, we don’t have in our budget,” said Michael Fulmis, anti-fireworks coordinator for the Los Angeles City Fire Department at the time of Londre’s initial brainstorm. “So the service has been invaluable. We couldn’t have done it without him.”

Londre, who has taught at USC in either the School ofJournalism or the School of Business Administration for 15 years, said he’s been motivated to carry on the campaign by its continuing success.

Although July 4 remains the busiest day of the year for L.A. firefighters, the toll has dropped dramatically.

Last year, a decade after the first ad, fireworks were blamed for 179 injuries, five fires and $59,175 in property damage.

As an additional benefit, the project has provided plenty of fodder for Londre’s “Introduction to Advertising” course. He uses past campaigns to teach such concepts as believability, awareness raising and attitude shaping, as well as the merits of different advertising media.

Not bad for an idea that sprang from a quiet stroll in Northridge.

“My wife and I were walking one night through our neighborhood,” Londre recalled. “We saw kids setting off bottle rockets. I said, ‘this is crazy. Someone’s going to lose their property or get hurt.”

Alarmed, Londre, who has since moved to Studio City, called the fire department. What he heard was more frightening still: that the city lacks the manpower to enforce the laws that have made all fireworks illegal in Los Angeles since 1941.

The solution, he concluded, was to change the mind-set of scofflaws – typically teens to whom, as Londre put it, “‘no’ can sound like ‘yes.'”

Instead of wagging a finger, Londre decided to show the consequences of fireworks, the most frequent of victims of which are children under 10. That turned out to be a winning formula.

The campaign won one Clio, a national award that recognizes excellence in advertising; two Beldings, a Los Angeles-based advertising award; and three Obies, recognizing creativity in outdoor advertising across the country.

“There are few things more arresting than a child in danger,” said Eric Hirshberg, Fattal & Collins’ vice president and associate creative director. “It’s a universal symbol. It stops people dead in their tracks.”

Ironically, the fire department didn’t know what to make of Londre’s initial offer.

“To say to the fire department that you’re a private citizen who wants to give them an idea for free was hard,” he said. “They were really skeptical.”

Even after Londre got them to agree to the idea of the pro bono campaign, he had a hard time persuading officials to approve the first advertisement, which featured a charred baby doll with the tagline “There’s Nothing Cool About Fireworks.”

Resistance has steadily dwindled as results and accolades have mounted. This year, it took Londre “literally seven minutes” to sell the fire department on the new campaign.

“It’s not a rubber-stamp,” Londre said. “Trust has been generated.”