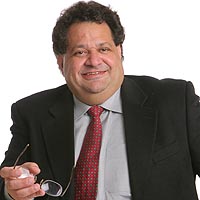 James M. Ferris, director of the Center on Philanthropy and Public Policy

Los Angeles area philanthropic foundations have experienced significant growth in assets and giving, but the community has not kept pace with its state and national counterparts, according to a new study released today by the Center on Philanthropy and Public Policy at the USC School of Policy, Planning, and Development.

“Foundations for L.A.?: An Analysis of Scale, Scope and Reach of Foundation Philanthropy in L.A. County” examines the size and growth of Los Angeles area foundations and provides an analysis of the flow of grant dollars to the 123 communities that make up Los Angeles County.

“This report provides the first systematic analysis of Los Angeles foundations and the impact of foundation philanthropy on Los Angeles,” said James M. Ferris, director of the Center on Philanthropy and Public Policy. “But even more importantly, it highlights opportunities for increasing the potential of philanthropy as a source of venture capital for Los Angeles communities.”

Key findings of the report include:

� Los Angeles area foundations have grown significantly. In 2002, there were 2,077 foundations in Los Angeles County with assets totaling $25.8 billion and grants totaling $1.2 billion. This represents a two-thirds increase in the number of foundations, a doubling of assets and a growth in gifts of more than 250 percent since 1992. But this growth did not keep pace with statewide and national trends.

The Scope of Grantmaking:

� Los Angeles foundations account for 44 percent of the grant dollars received by nonprofit organizations in the city.

The Reach of Grantmaking:

� The reach of foundation philanthropy in Los Angeles County is highly varied. The grant dollars received by nonprofits in a specific community ranges from zero to $93.8 million, with a mean of $3.5 million and a median of $391,219.

� Twenty-one of the 123 communities received no grants from the specific foundations in the sample of grants.

� A significant amount of foundation philanthropy is concentrated in communities where larger nonprofit organizations such as universities and colleges, cultural institutions, and research and teaching hospitals are located. The beneficiaries of this philanthropy are not restricted to the neighborhoods where the organizations are located.

� The number of nonprofits in a community is the strongest determinant of the grant dollars a community receives.