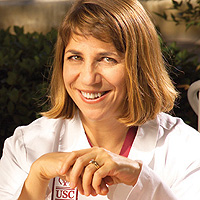 Gynecologic oncologists in the Keck School of Medicine of USC have helped propel a significant advance in the battle against ovarian cancer.

Lynda Roman, associate professor in the Keck School, and colleagues from USC/Norris Comprehensive Cancer Center and LAC+USC Medical Center participated in a study showing that a high-powered chemotherapy regimen can dramatically improve survival in women with advanced ovarian cancer.

Roman and her USC colleagues provided the chemotherapy regimen to ovarian cancer patients as members of the Gynecologic Oncology Group, a research network supported by the National Cancer Institute. Oncologist Deborah K. Armstrong of the Johns Hopkins Kimmel Cancer Center was lead author on the study.

Ovarian cancer is one of the most lethal cancers in women: Fewer than half of the women found to have the cancer survive five years after diagnosis. Any advance to fight the disease is applauded by physicians, patients and caregivers, and this therapy appears to deliver on its promise.

The treatment is intriguing because it features intraperitoneal or IP chemotherapy, the delivery of anticancer drugs directly into the intraperitoneal cavity in the abdomen, where ovarian cancer is most likely to spread or recur.

“We have been using IP therapy for several years at USC, so we have a great deal of experience with it,” Roman said. “We have seen its benefits.”

Standard therapy for advanced ovarian cancer begins with surgery and follows with six to eight courses of intravenous chemotherapy consisting of a platinum drug, such as cisplatin, and a taxane drug, such as paclitaxel.

In this study of 429 women, about half received paclitaxel and cisplatin intravenously. The other half got paclitaxel intravenously, then abdominal infusions of cisplatin and paclitaxel at high doses. In IP chemotherapy, the drug is delivered through a catheter implanted in the abdomen.

Researchers found that, on average, women on combined intravenous and intraperitoneal chemotherapy survived more than 5 1/2 years, while those on intravenous chemotherapy exclusively survived slightly more than four years. The 16-month difference represents a huge boost in survivorship.

Some women however, experienced significant side effects with the IP treatment. “By adjusting the dose and timing of the IP therapy, the side effects can be significantly lessened,” Roman said.

Based on these promising results, the National Cancer Institute has recommended that the therapy be adopted as the preferred method of treatment, a move echoed by several women’s health organizations.

Roman and her colleagues continue to offer the treatment at USC/Norris and LAC+USC.