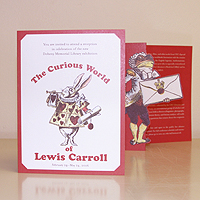 The exhibit includes a sampling of the mania Carroll’s creativity has spawned, including pop-up books, musical recordings and playing cards.

A standing room-only crowd of university officials, students, faculty, literature lovers and the young at heart gathered Feb. 24 in the Treasure Room of the Doheny Memorial Library for the opening of “The Curious World of Lewis Carroll,” an exhibition devoted to the work of the beloved author.

Although the Cheshire Cat never appeared and the White Rabbit was running late, fans of Carroll’s work lined up to view selected rare books, pamphlets, films and other collected works that represent the lifelong work of the English logician, mathematician, photographer and nonsense poet who is best remembered for “Alice’s Adventures in Wonderland.”

The exhibition is part of USC’s G. Edward Cassady and Margaret Elizabeth Cassady Lewis Carroll Collection. Included in the exhibition are first-edition copies of “Alice’s Adventures in Wonderland” (1865) and its sequel, “Through the Looking-Glass” (1871). Also on display are a number of translations of Carroll’s work � in languages ranging from Arabic to Urdu � and artistic treatments of the “Alice” books in rare editions by Marie Laurencin and Salvador Dal�.

The exhibition includes a sampling of the mania Carroll’s creativity has spawned, including pop-up books, musical recordings and playing cards based on illustrations made for the original “Alice” books by John Tenniel.

“Lewis Carroll remains a brilliantly enigmatic person to study � and one who cannot be easily categorized,” said Tyson Gaskill, director of programming for the USC Information Services Division (ISD). “Although he is one of the most studied figures in literature, certain aspects of his life are a mystery, and it feels as if we are missing keys to his deeper motivations.”

A collection of 95 books and 20 pieces of Carroll-related artifacts was donated to the university in 2000 by USC alumnus George Cassady. The collection has been expanding ever since and now contains approximately 1,000 items.

Recent additions to the collection not on display include a sound recording of “Alice” read by actor John Gielgud, an 1897 autographed letter from Carroll to Edith Miller (one of his childhood friends in Oxford, England) and a first-edition, 1874 copy of Carroll’s book of essays, “Notes From an Oxford Chiel.”

As part of the semester-long celebration of Carroll’s legacy, a series of special events and programs has been planned to complement the exhibition.

“Lewis Carroll and the Idea of Childhood,” an international conference jointly sponsored by USC and the Huntington Library, takes place March 31-April 1.

“Because of the range of Carroll’s intellectual pursuits, the conference should prove a fascinating confluence of traditional academics and whimsy,” Gaskill said.

The Lewis Carroll Society of North America has scheduled its annual meeting around the two-day event. The day before the conference, society members will read to students at the Norwood Street elementary school and donate 50 copies of the “Alice” books at an event arranged with the help of the USC Joint Educational Project.

In addition to the exhibition and conference, the second annual Wonderland Award will be presented at a reception in Doheny Library on April 13. The competition � open to graduate and undergraduate students � was created by Linda Parker, friend of the USC Libraries, to promote the use of the Cassady collection.

Winners will be selected based on how well the entry combines scholarly research and creativity. The deadline for submission is March 21.

A ‘Curious’ Glimpse Inside Wonderland