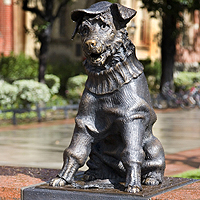 The bronze sculpture of George Tirebiter is titled “Mascot/Fan.”

Tommy Trojan has some canine competition. The majestic sculpture of USC’s renowned symbol is not the only bronzed icon on campus.

In late February, a bronze statue of George Tirebiter, the mutt who became a USC mascot, was installed at the end of Bloom Walk on Trousdale Parkway just above Exposition Boulevard on the south side of campus.

The sculpture, titled “Mascot/Fan,” was designed by artist Michael Davis of San Pedro. It was a gift from the Bloom family, of Bloom Walk fame: Ron, (class of ’55), Sandy, Laurie and Mitch (class of ’85).

The sculpture is of an appealing mixed breed dog wearing a sweater and cap, sitting above a pile of three tires. A bite has been taken out of the top tire, and the offending scrap of rubber is at the dog’s feet.

The sculpture’s commission was coordinated by graduate students in public art studies and the USC School of Fine Arts faculty. Davis’ design was selected from four finalists who presented their proposals to a student audience.

Here’s what the legend reads on the granite at the side of the installation: “George Tirebiter was a shaggy mutt who � for a few glorious years in the ’40s and ’50s � became a beloved Trojan mascot.

“No one is quite sure when George wandered onto campus, but his feisty personality made him a student favorite as he chased cars and bit tires along University Avenue, not far from where you stand.

“He was taken to football games in a limousine where he led the Trojan marching band onto the field, often wearing sweaters and odd little hats. He once drew the cheers of thousands when he bit the mask of UCLA mascot Joe Bruin on the nose.

“Rumor has it there is a transcript on file showing George with a GPA of 3.2 in such courses as Chasing Cats 101 and Biting Tires 270.

“Of all the great USC mascots, none had the bite of George Tirebiter.”

Here’s a Shaggy Dog Story for the Ages