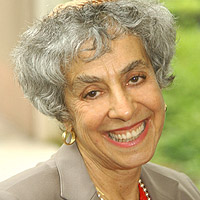 “One of my prevailing principles has been to take calculated risks,” said Rabbi Laemmle, dean of USC’s Office of Religious Life.

Eight times a year, a USC faculty member gulps, faces a crowd of students and colleagues, and bares his or her soul. They do so at the request of a student committee for “What Matters to Me and Why,” a program brought to the campus five years ago by Rabbi Susan Laemmle, dean of USC’s Office of Religious Life. The idea began at Princeton, and variations are running at Stanford, the University of Chicago, the University of Pennsylvania and elsewhere. On April 5, a retrospective celebration will be held at noon at the Ground Zero Coffeehouse, featuring most of the speakers from the past five years. The time seemed right for a chat with the program’s founder.

AE: First things first. Are you related to the owner of the movie theaters?

SL: (Laughs.) Carl Laemmle, who started Universal Studios, brought many relatives over from Germany. My father and my uncle came in the early 1930s and sold film for him. When he sold Universal, they opened the first Laemmle theater, which was just a little podunk theater in Eagle Rock. I grew up working at the Los Feliz theater on Vermont, selling popcorn and candy and working as a cashier. My first cousin Robert now runs the theaters with his son, Greg. My husband and I have a pass, which is worth its weight in gold.

AE: In the five years of “What Matters to Me and Why,” have students always selected the speakers?

SL: Yes, but I don’t know where I got the idea that a student committee was so important. Episcopal Bishop Frederick Borsch, who started the program at Princeton in 1982 when he was the Dean of the Chapel, never told me anything about a committee. But it was clear to me that I should have a student committee. I could fill the lineup of presenters by myself, but it wouldn’t be as good. The way we do it at USC, “What Matters to Me and Why” is a leadership program for the students, and they bring in people I wouldn’t have thought to.

AE: During those five years, is there anyone the students have chosen who declined to speak?

SL: Only one sticks in my mind. It was somebody who hadn’t been at USC long. He said he’d never been to a program and so he felt hesitant to sign on. It’s somewhat amazing that scholars and scientists of repute, who are very well known, are still nervous about doing this. My standard reply is, ‘Appropriately so. If you weren’t nervous, you wouldn’t be the kind of person we would want talking about this topic.’

AE: On the poster, it states that speakers talk about “choices made, difficulties encountered and commitments solidified.” Are there any remarkable admissions that have come out?

SL: President Sample’s was amazing. President Sample said that his parents divorced and that’s why his marriage was so important to him. Eliz Senezarian [political science] spent most of her time talking about what it had been like to come to the United States from Iran and difficult things she had experienced. Tara McPherson [cinema-television] talked about how having a child changed her life. When a faculty person asks me for advice, I say ‘be as personal as you are comfortable being.’ But it’s not just what people say. It’s the fact that they are willing to stand in front of others and reflect in public. I think there’s something about faculty presenting themselves in that way that is important and moving, especially to students.

AE: Speakers are free to choose any topic. Do you have a few favorite or unexpected topic choices?

SL: They’re not supposed to just give a lecture about the content of their courses. It’s interesting to see how people approach the challenge. Dallas Willard is a good example. He is a distinguished professor of philosophy, but he has a whole second aspect to his life, as a very important Christian teacher and lecturer. Hundreds of Christian students came to hear Dallas Willard, their hero. Dallas Willard not only didn’t say ‘Jesus Christ,’ he didn’t even say ‘God.’ He talked about cardinal philosophical values that mattered to him. I felt that some of the students may have been disappointed. But I think that was part of his point. It wouldn’t have been as good of a program if he couldn’t have done what he wanted. I like the programs being idiosyncratic and risky. When I was entertaining the idea of being a candidate for my position 10 years ago, the thing I was most worried about was that it would be boring, because interfaith stuff can be really boring, and la-de-dah. And so, one of my prevailing principles has been to take calculated risks.

AE: What will be the format of the April 5 retrospective?

SL: It’s going to be at Ground Zero, and we’ll have round tables set up inside and on the patio. Two past speakers and one student committee member will be at each table, along with 20 or so attendees. The student committee member will facilitate discussion, with audience members asking questions. After about 15 minutes, the two faculty speakers will move on to another table, so everyone will get to sit with and listen to four past presenters. Almost everyone who has spoken over the past five years has agreed to come. Of the 40 possibilities, about 35 are still at USC, and we have between 25 and 27 speakers coming. It will be a celebration of all the wonderful people who have done this, and how good it is that we stop and ask ourselves, ‘what matters to me and why?’