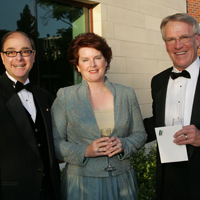 “Few people in the university’s history have had as profound an impact on the life sciences as the Dornsife family,” Aoun said. “They are true pioneers and are continuing a pioneering tradition that began with David’s late parents, Harold and Ester Dornsife. With the endowment of the HEDCO Neuroscience Building, among others, the elder Dornsifes solidified our leadership in neuroscience when it was still an emerging field.”

In 2003, the Dornsifes gave an $8 million lead gift to establish the Dana and David Dornsife Cognitive Neuroscience Imaging Center in the College, which opened in 2004. Dedicated to research, the state-of-the-art center houses a powerful brain-imaging scanner.

The center was pivotal to the College’s successful recruitment of the Damasios to the faculty, Aoun said.

Hanna Damasio, professor of psychology, neuroscience and neurology who pioneered the use of brain imaging methods in the study of brain lesions, directs the Dornsife Neuroscience Imaging Center. Antonio Damasio, professor of psychology, neuroscience and neurology whose studies of the brain and behavior have reshaped scientific understanding of emotions, memory, language and decision making, is founder and director of the USC Brain and Creativity Institute.

The Dornsifes’ recent gift will provide the Damasios with the resources required to keep them at the leading edge of their discipline.

“The Dornsifes have contributed remarkably to the environment in which we work,” the Damasios said. “It is an honor to be associated with them through these endowed chairs.”

“We eagerly await the opportunity to collaborate with Antonio and Hanna Damasio,” said David Dornsife, chairman of the board of the Herrick Corp. and Gillig Corp., vice president of the HEDCO Foundation and a 1965 graduate of the USC Marshall School of Business. “We wanted to provide a catalyst for new discoveries. We’re inspired by the wonderful people here and optimistic about what might be accomplished.”

Previously, David and Dana endowed two chairs in memory of Harold and Ester Dornsife, whose contributions to the Seeley G. Mudd Building and HEDCO Neuroscience Building helped to create modernized infrastructure that significantly enhanced science education and research at USC.

“Our relationship with the two recipients of the chairs we endowed in my parents’ names has been very meaningful to us, both from the scientific exposure and just as important, we enjoy being with them as individuals,” said David Dornsife, referring to Norman Arnheim, holder of the Ester P. Dornsife Chair in Biological Sciences, and Irving Biederman, holder of the Harold W. Dornsife Neurosciences Chair. “I didn’t realize that we would start being a part of their work and part of the magic they’re bringing to campus.”