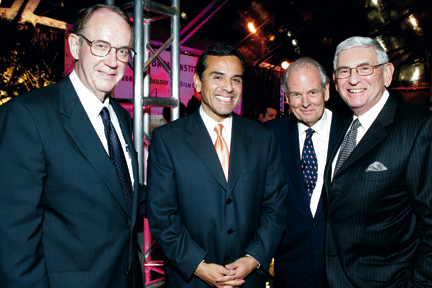 Faculty, staff and supporters of the Keck School of Medicine of USC gathered on March 29 for a dinner paying tribute to philanthropists Eli and Edythe Broad. Their recent $25 million gift to the Keck School will create the Broad Institute for Integrative Biology and Stem Cell Research.

“This evening, we are celebrating the new Broad Institute for Integrative Biology and Stem Cell Research, and the way it has enhanced and invigorated our ‘View to the Future’,” said Keck School of Medicine Dean Brian Henderson in opening the evening and introducing its theme. “I have to say, from my own vantage point here at the Keck School, that view is pretty amazing.”

“The Broad Institute will be many things for this university, this community, this region,” added USC President Steven Sample.

Eli Broad remarked, “It is only fitting that the Broad Institute is created here in Los Angeles to realize the full potential of this cutting-edge medical research.”“California has become a national leader in stem cell research because it has taken the initiative to provide funding, despite federal reluctance. It is our hope that the Broad Institute will be an attraction for the most brilliant scientists from around the world and especially those in our backyard. We need the very best facilities and technologies to attract and retain the top scientific talent.”

“All of us have a tremendous opportunity to be a part of something transformational, something much larger than ourselves, something that will improve the quality of life for millions of people around the world,” Sample said.

Added Henderson: “As you can see, we’ve already begun to plant our most promising scientific seeds in extremely fertile ground. Now is the time to nurture them, and watch them grow.”