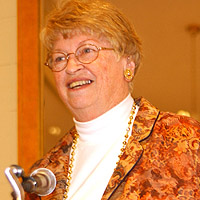 “I knew the caliber of the people who had received the award before and didn’t think of myself in that way,” Ewing said.

Retiree Ewing was honored March 15 for her stewardship of the H. Dale Hilton Living History Project, which produces videotaped interviews with retired faculty and staff.

Ewing already was a busy volunteer when she was asked to take on this project.

She was a volunteer in a first-grade class, served on the board of an active League of Women Voters chapter, took a watercolor class and volunteered at the Whittier Public Library in tech services. And she also worked as an official at every election since her retirement in 1998. But then a persuasive Paul Hadley, then director of the Emeriti Center, called her to service.

When Ewing told her son Mark she had turned down Hadley’s offer, he said, “You really should do it. Those people should be filmed or their stories will be lost.”

Ewing said, “I thought about it again and then told Dr. Hadley I would coordinate the program. I’ve never regretted it.”

Janette Brown, executive director of the USC Emeriti Center, said, “Joan’s volunteer work in coordinating the videotaping of honored emeritus faculty and staff has helped to capture the vibrant history of the university.”

When Brown called Ewing to inform her that she was the recipient of the award, she was very surprised.

“I was so stunned when Janette called me,” Ewing said. “I knew the caliber of the people who had received the award before and didn’t think of myself in that way.”

As coordinator, Ewing arranged 19 of the interviews � almost half of the entire Living History collection.

“These are the most interesting people, and I was fascinated by their stories and recollections of their time at the university,” she said. A few that stand out in her memory are Nancy Warner and Louise Ball, Keck School of Medicine of USC; Robert Mannes, former dean of Student Affairs; and Judge Dorothy Nelson, former dean of the USC Gould School of Law.

Ewing came to the USC Marshall School of Business in 1988 and worked in the Master of Science in Management for Information Executives program. After a year and a half, she moved to IBEAR as program manager, then switched to Food Industry Management as assistant director, where she stayed until her retirement in August 1998.

Before arriving at USC, she worked at Whittier College as a counselor in the career planning and placement department and did some substitute teaching. But her main job for many years, she said, was raising three sons.

“I feel honored to receive the Leibovitz Award,” Ewing said. “USC and the Emeriti Center are still an important part of my life. It makes me feel more closely tied to the people at the center who are doing so much for retirees from every school and department of the university.”

What’s next for Ewing?

“My husband and I have been traveling and now have plans for more trips,” she said.