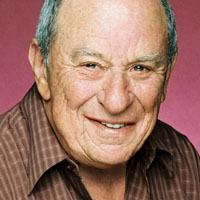 Daley said the gift, which pays tribute to a man who has been an industry leader for nearly half a century, will enable cinema-television students to continue to receive the best education and guidance in their career advancement.

“When I was at USC, the ability to land a job out of film school was a mixture of skill, luck, connections and chutzpah,” said Lucas, who studied at USC during the 1960s and in 1992 created the Office of Student-Industry Relations, which Auerbach directs. “You still need all those to succeed, but this program, with Larry at the helm, dramatically improves the odds.”

“I am tremendously grateful to Marcia for this honor, as well as the opportunity to help these talented students transform their dreams into reality,” said Auerbach, who spent many years as an agent and board member of the William Morris Agency.

Arriving at the school in 1992, Auerbach used that network to the school’s benefit, drawing entertainment industry leaders as instructors of the undergraduate and graduate business courses he established.

His Office of Student-Industry Relations assists students with access to film festivals � from Cannes to Sundance to USC’s own First Look Festival � and provides personal career counseling, industry internships and alumni networking services.

“My main reason for coming to USC was to help the students and to develop and expand relationships between the school and its entertainment neighbors throughout L.A.,” Auerbach said. “This assignment allows me to share with the students and give back to the industry what I have learned over the course of my many years in the business.”

Daley said, “Endowing an academic chair is one of academia’s most venerated traditions. In funding this position, Marcia is honoring Larry’s achievements, as well as strengthening the groundbreaking business entertainment courses and numerous services for students and recent alumni that we offer as they press forward in their drive to join the entertainment arts.

“She is also paying tribute to those agents who have been so instrumental in making our industry strong,” Daley added. “Few outside the business know anything about the role of representation, and this chair recognizes the importance of the men and woman who have indeed shaped American film and television for the last century.”

The Auerbach chair marks the school’s 13th endowed faculty position � a record for any U.S. school of cinema-television. The installation event will take place May 10 at a private reception in Beverly Hills attended by many of Auerbach’s colleagues in the industry.