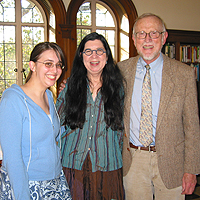 Alvandi and the other winners were congratulated on their winning entries at a reception in Doheny Memorial Library.

Alvandi, who is completing her Ph.D. in English, received the $1,500 first prize for her manuscript titled “Dinah’s Adventures Underground.”

Scott Reding, an undergraduate majoring in creative writing, placed second and received the $1,000 award for the poem “The Day Dreamland Opened Its Doors,” while freshman history major Veronique Van Pelt received the $750 third-place award for her original artwork “A Sensibly Nonsensical Treatment of Lewis Carroll’s Alice’s Adventures in Wonderland.”

Fourth place was shared by comparative literature doctoral candidate Mary Traester with her short story “Wonder in Aliceland” and cinema senior David Server for his live-action DVD production “The Frumious Final.” Both students earned $500 for their efforts.

Made possible through a gift from Linda Parker, the Wonderland Award is a multidisciplinary competition that encourages new scholarship and creative work related to Lewis Carroll, the English logician, mathematician, photographer and nonsense poet best remembered for “Alice’s Adventures in Wonderland” (1865) and its sequel, “Through the Looking Glass” (1871).

“This year’s competition was marked by unusual variety and ingenuity, especially in finding ways to address the many sides of Lewis Carroll by using the many sides of modern technology and creative media,” said USC English professor James Kincaid, who was part of the judging panel.

“The winning entry utilized some wonderful old-fashioned archival scholarship in combination with postmodern creativity to arrive at an unexpected and consistently sparkling work Lewis Carroll himself would have prized,” Kincaid said.

The award ceremony caps a semester-long celebration of Carroll’s work. “Lewis Carroll and the Idea of Childhood,” an international conference jointly sponsored by USC and the Huntington Library, took place March 31-April 1. The exhibit titled “The Curious World of Lewis Carroll” is on display in the Doheny Library’s Treasure Room through May 24.