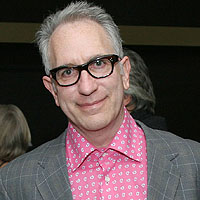 “Over the course of its history, we’ve had great success,” said Howard Rodman, chair of the school’s division of writing for screen and television.

“In the short time since 2002, when we held the inaugural First Pitch session, this event has become a premier point of introduction for the industry to meet face-to-face with the freshest writing talent coming out of USC,” said Dean Elizabeth M. Daley. “In one evening they have unparalleled access to scores of men and women who bring new voices and diverse perspectives to the art form.”

“Going to First Pitch is like getting a glimpse of the IMDB pages of tomorrow,” said Howard A. Rodman, chair of the school’s division of writing for screen and television, referring to the online database that charts the careers of entertainment professionals.

“Over the course of its history, we’ve had great success with students either landing representation, selling ideas or otherwise finding opportunities in the industry that they might not have had without First Pitch,” Rodman added.

Each year, students participating in First Pitch secure an average of two follow-up meetings with industry reps. From those meetings, one third attain formal representation and another third get “hip pocketed.”

A sampling of success stories includes: Brad Riddell, whose pitch led to his hiring for “American Pie Presents Band Camp”; Rachel Wienberg, who gained representation at First Pitch that led to optioning her thesis script to Noah Wylie; and Tim Crocteau, who optioned his script “Sunset” to MPI Media Group.

Since its inaugural session, First Pitch has drawn representatives from some of the entertainment industry’s most prestigious firms, including CAA, William Morris, ICM, UTA, Endeavor, Fuse, Management 360, Sony and Paramount.

Taking place over two intense hours, the event format features a series of rapid-fire five-minute sessions in which the soon-to-graduate writers advance from table to table for predetermined meetings that match their stories with the specific interests of the industry representatives.

The scripts, which the students spend the previous year developing as their thesis projects, range from blockbusters to small independents, as well as covering all facets of television.

This year’s First Pitch will be held at the Four Seasons in Beverly Hills. As in the past, the event is by invitation only.

Making the First Pitch: Deal or No Deal?