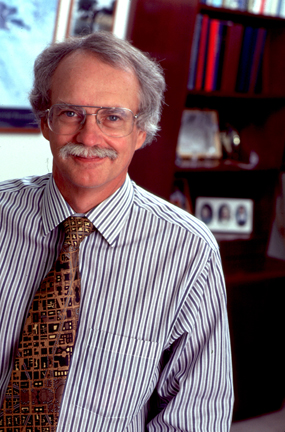 Ronald K. Ross, a respected pioneer in research on the relationship between hormones and cancer and chair of the renowned Department of Preventive Medicine of the Keck School of Medicine, died of brain cancer Friday April 21. He was 57.

Ross’s groundbreaking work included providing evidence of a strong association between menopausal estrogen use and breast cancer risk. His research led to critical scientific progress in understanding the role of cellular proliferation in cancer and understanding the effects of aspirin and other analgesics on both cancer development and on cancer prevention. He was among the first to demonstrate the health risks and benefits of alcohol consumption and explain how medical history and lifestyle impact the risks of bladder and kidney cancer.

“Ron was enormously creative,” noted Brian Henderson, Dean of the Keck School of Medicine and for many years Ross’s colleague in the Department of Preventive Medicine. “He was tirelessly dedicated to his research, but more so to the people he worked with, whether it was faculty or staff. He had a very special talent for bringing people from diverse disciplines together – to creating interdisciplinary teams of scientists.”

As chair of the Department of Preventive Medicine and deputy director of the USC Norris Comprehensive Cancer Center, Ross led USC to the top in the country in terms of funding for preventive medicine research-although he was known for writing his grant applications in long hand on a yellow pad.

“He was a brilliant scientist who had a burning passion for epidemiologic research,” said Peter Jones, director of the USC Norris Comprehensive Cancer Center. “He had an instinct for science and people, and his advice was always right on target. This is an enormous loss.”

Ross was highly regarded not only as a scientist but also as an administrator, leader and role model. “He was the best at everything he did,” noted Leslie Bernstein, professor of preventive medicine at the Keck School. “He pushed us all to achieve excellence, and he always knew the right direction to take whenever we weren’t certain. His feedback was never negative-it was ‘Let’s take it a step further’ and he always made you feel like it was innovative.”

A native of Muscatine, Iowa, Ross received both his masters and his medical degree in 1975 from the University of Iowa after completing his undergraduate work at Rutgers University in New Jersey. He was recently awarded the University of Iowa Alumni Association’s highest honor-the Distinguished Alumni Award-for his research accomplishments in cancer epidemiology, in which he focused on interactions between the environment and genetics in the etiology of cancer.

Ross spent his entire career at USC, joining the faculty as an instructor in what was then known as the Department of Community and Family Medicine in 1976. In 1987 he became director of the Los Angeles Cancer Surveillance Program, one of the leading groups in developing new ways to do population-based studies of disease and evaluating demographic patterns of cancer risk.”Los Angeles is the perfect place to do this sort of work,” he once noted. “We have a lot of population resources around here that we exploit. It’s one of the draws for coming to USC, and it is one reason why people stay.”With more than 250 publications to his name, Ross was recognized as one of the leading experts in hormone-related cancers. He held the Catherine and Joseph Aresty Chair in Urologic Cancer, Flora L. Thornton Chair in Preventive Medicine and was among the top-funded faculty members at the Keck School of Medicine, in some years generating more than $6 million in grants.

When he was appointed chair of the Department of Preventive Medicine in 1999, Ross said the department “is one of the best models for interdisciplinary research, which is the future of all scientific research. I don’t think there are any scientists in this department who are not actively engaged in research with other scientists in other departments.”

Ross, who loved travel and deep sea fishing, had a tradition of taking his three children and meeting with a group of friends and their children every Father’s Day in La Paz, Mexico. “He was important to so many people,” said Bernstein. “His contributions to science will have a lasting impact. His friendship will be missed by many.”

Ross is survived by his wife Karen and their three children, Jason, Jonathan and Kally. Services will be held Saturday, April 29 2006 at St. Bede Catholic Church in La Canada at 10 a.m. The family requests that all donations in his name go to the Dr. Ronald Ross Cancer Fund at the USC Norris Comprehensive Cancer Center, 1441 Eastlake Ave., Room 8302, Los Angeles, CA, 90033.

Ronald K. Ross, Chair of the Department of Preventive Medicine at Keck School of Medicine of USC, 57