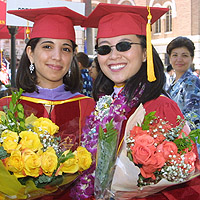 USC’s 125th anniversary celebrations reach their big finale for students at the 123rd annual commencement ceremony at Alumni Park Friday, May 12. More than 8,000 Trojans will receive their diplomas this year, a far cry from the university’s first graduating class of three.

“This commencement is particularly poignant in light of USC’s 125th-anniversary theme of ‘Inventing the future, honoring the past,’ ” President Steven B. Sample said. “Our new class of graduates � in taking their place in society as leaders, artists, professionals and productive citizens � joins a long and storied procession of Trojans who, over the years, have brought honor to their alma mater through their achievements and good deeds.”

The main commencement ceremony begins at 9 a.m. following the procession of degree candidates from Bovard Auditorium to Alumni Memorial Park.

Los Angeles Mayor Antonio Villaraigosa will address the graduating students and the estimated 40,000 spectators. He will receive one of the four honorary degrees awarded this year. Valedictorian Kavitha Sivaraman will be honored with salutatorians Kathryn Neeper and Aaron Wong.

Villaraigosa, a graduate of UCLA and the People’s College of Law, was a distinguished visiting fellow at USC’s Southern California Studies Center. Since his inauguration as mayor in July 2005, he has spoken about leadership in several undergraduate classes at USC. His political resume includes service as speaker in the California State Assembly and on the Los Angeles City Council. His mayoral election platform focused on the city’s challenges in education, transportation, public safety and economic development.

Following the ceremony, the graduates will break away to walk the stage at their respective schools’ satellite ceremony. This year’s satellite speakers include John Singleton, class of ’90, an Oscar-nominated writer, producer and director, at the USC School of Cinema-Television; Craig Newmark, founder of craigslist.com, at the USC Annenberg School for Communication; and the honorable George Herbert King of the United States District Court, at the USC Gould School of Law.

Commencement week festivities kick off Wednesday, May 10, with the Phi Kappa Phi initiation ceremony in Bing Theater. This year, nearly 200 students will be inducted into the university’s oldest honor society.

The Graduate School’s Ph.D. hooding ceremony takes place at 9:30 a.m. May 11 in Bovard Auditorium, with the doctoral hooding ceremonies for other schools to be held throughout the day and into the next. This year, the Ph.D. students also will march in the main commencement processional between the students and the faculty.

Also on May 11, 285 students will be honored at the Senior and Graduate Recognition Awards Ceremony in Bovard. The 10 Renaissance Scholars will be recognized along with the 23 recipients of the Laurel and Palm award, an honor bestowed upon roughly 1 percent of the student population for outstanding achievements at USC.

The Baccalaureate Ceremony for graduating students and their families will be held that evening at 5 p.m. in Bovard. Sharon M.K. Kugler, the chaplain of Johns Hopkins University, will address the crowd, followed by music and readings from various religious traditions. Immediately following is the Baccalaureate Dinner at 6:30 p.m. on Pardee Way.

The Black Graduation Celebration and Chicano/Latino Graduation will be held at 8 p.m. in Bovard and at Howard Jones Field, respectively.