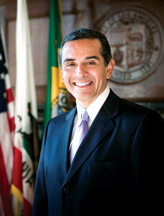 A mayor, a health-care professional, a journalist and an academic will receive honorary degrees at commencement this year.

Antonio Villaraigosa was born in East Los Angeles in 1953 to a Mexican immigrant father and a California-born mother of Mexican descent. He earned a bachelor’s degree in history from UCLA and, in 1985, a law degree from People’s College of Law.

Vartan Gregorian is president of Carnegie Corp. of New York. Prior to his current position, which he assumed in 1997, Gregorian served for nine years as the 16th president of Brown University. He earned a Ph.D. in history and humanities from Stanford in 1964.

Gregorian is the author of “The Road to Home: My Life and Times, Islam: A Mosaic,
Not a Monolith,” and “The Emergence of Modern Afghanistan, 1880-1946.”

Herbert G. Klein is a retired vice president and editor in chief of Copley Newspapers and a former White House communications director during the Nixon Administration. A devoted Trojan and graduate of 1940, he does his alma mater proud through both his professional accomplishments and his direct contributions to the university.

Klein’s distinguished record as both a media professional and a Trojan was honored in 2004, when the Half-Century Trojans bestowed on him their inaugural Hall of Fame award, recognizing “degreed alumni of the University of Southern California who have utilized their educations at USC to become outstanding leaders.”

A journalism major, Klein was sports editor of the Daily Trojan, writing a column his senior year called “Sports Scribbles.” He is a life member of the USC Board of Trustees.

For the past two years, she also has served as the assistant director for roadmap coordination for the NIH. Before being commissioned by the Public Health Service in 1978, Kleinman was an assistant professor for two years at the University of Maryland at the Baltimore School of Dentistry.

Her first Public Health Service assignment was with the division of dentistry, participating in preventive dentistry and dental auxiliary activities. In 1980, she joined the National Institute of Dental and Craniofacial Research as an evaluation officer. In 1990, Kleinman was assigned to the Office of the Surgeon General, returning to her current position in 1991.

Four Individuals to Get Honorary Degrees as Part of Celebration