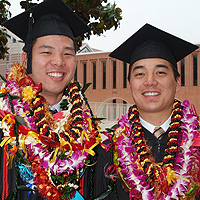 Adorned by leis, Sean Mochizuki and his roommate Jason Tsuno bask in the glow of graduation.

As Los Angeles Mayor Antonio Villaraigosa surveyed the crowd at USC’s 123rd commencement, he reminded the more than 40,000 parents, friends, faculty members and students of the uncertain world in which we live.

“Friends, the great paradox of the 21st century lies in the truth that the world has never been more closely connected nor more fundamentally riven,” Villaraigosa said.

He talked about the polarization in Washington and across the country that resulted from 9/11 and the ongoing conflict in Iraq. Then he reminded the 8,000 graduates of the Class of 2006 that they are equipped to change things.

“I believe that these graduates have the necessary life experience to show us a different way,” Villaraigosa said. “They have the stuff to lead us as USC’s sons and daughters always have.”

President Steven B. Sample also stressed the many benefits � and responsibilities � of earning a USC degree.

“Our hope is that we have helped you acquire an education which will serve and inspire you for a lifetime,” Sample said, “an education that will enable you to pursue meaningful and satisfying professional lives as you continue to grow and develop as individuals and engaged citizens.”

Until a few days ago, Caitlin Anderson was a bit blas� about graduation and was not nostalgic about her college years. She earned an accounting degree but she’s staying at USC for graduate school.

“All you do is wear the same thing, walk across a stage and then your name is pronounced wrong,” Anderson said.

Then she attended the Senior Recognition Ceremony earlier this week at Bovard Auditorium and was honored for her volunteer work.

“It finally hit me,” said Anderson, who hails from Minneapolis. “And then to be recognized by the university. I became so excited for today.”

“We weren’t terribly surprised at her success,” said her father said. “But it was rewarding to watch it happen.”

The historic commencement ended the125th anniversary celebration of USC’s founding in 1880, when the university opened its doors with one building, 54 students and six faculty. The moment was celebrated near the end of the ceremony as 125 white doves were released.

“While you stand today on the threshold of your future, you also are a part of a long procession of Trojans,” Sample said.

The words by Sample and Villaraigosa reverberated off the brick and concrete buildings that surround Alumni Plaza, where commencement was held.

Villaraigosa could not resist needling the USC faithful by pointing out his Bruin background. He used the heated rivalry between the schools to emphasize the need for cooperation in the midst of disagreement.

“There is a lesson in the great tradition of our rivalry that’s larger than any football game,” Villaraigosa said. “Even if we sometimes find ourselves on the other side of the aisle, even if we matriculated at different colleges … even if some of us register with different political parties … even then … I believe these graduates will lead us … and test us … and improve us … as real rivals always have!”

Grace and Charles Barth of Kansas City, Mo., didn’t know much about Villaraigosa before his speech, but were impressed with his message of unity and respect for others.

Their son, Kevin Barth, 22, embraces the uncertainty in his future, one his parents see filled with hope and promise.

“I don’t know what I’m going to do, but I’m going to make movies and stay in L.A.,” said Barth, who graduated from the USC School of Cinema-Television. “I really liked college life. It was all great. I’m going to miss it.”

The Class of 2006 Embraces Its Future