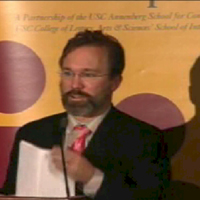 Can’t find Annenberg Island on a campus map? Wondering if the USC Annenberg School has gone out to sea? You need to get a life � specifically, a Second Life.

Annenberg Island, the piece of virtual real estate belonging to the USC Annenberg School for Communication, is situated in a prime corner of the popular online world known as Second Life.

USC may be the first university to stake a virtual claim, but it wasn’t waterfront the school was after. The island is one facet of a bold effort to use the virtual world to promote peace and goodwill in the real one.

The island’s first event was a live simulcast of the May 8 awards ceremony of the “Reinventing Public Diplomacy Through Games” competition, sponsored by the USC Center on Public Diplomacy.

Itself a first, the contest sought video games that would promote diplomacy and cross-cultural understanding among players.

A live/virtual simulcast is a strange hybrid. In Second Life � an animated world that anyone can tour � over 60 avatars, or characters, came to the island’s amphitheater for the awards show.

Once there, they cheered the finalists as their entries were demonstrated on a virtual screen through a live feed from the “real” venue.

Another 50-or-so physical spectators crowded into a conference room at Davidson Conference Center. A large screen displayed the finalists’ games, while plasma screens on either side showed the Second Life avatars watching the games, the real audience and themselves.

Spectators in both worlds saw first-place honors go to “Peacemaker,” a political leadership simulation that puts a player in the role of either Israeli prime minister or Palestinian president, struggling to contain instability while groping for peace.

Judges praised the game for its originality and technical merits.

The creators of “PeaceMaker” � graduate students at Carnegie Mellon University � were on hand to present their game.

“If you look at the video game industry today, there are so many games out there about violence, about war or destruction,” said team leader Asi Burak.

“We say a simple thing. There is certainly a place for one little game about peace.”

Burak’s pacifism earned his team a $5,000 cash prize and a rare networking opportunity in the form of dinner with the judges. The other three teams of finalists also dined with the judges and took home cash prizes of $2,500, $1,000 and $500.

Organizers had selected 13 proposals from dozens of inquiries following the contest’s announcement last fall. The number and quality of entries bodes well for the future of diplomacy as a grassroots force, said Josh Fouts, director of the USC Center on Public Diplomacy.

“The effectiveness of cultural diplomacy diminishes in proportion to its affiliation with the government, which is to say, the more the people attempt to solve for cultural differences in understanding, the more likely we are to succeed,” said Fouts, paraphrasing the late British diplomat Lord Lloyd.

Douglas Thomas, associate professor in the USC Annenberg School and contest co-organizer with Fouts, said “games are a great place for cultural exchange and that the kind of dynamics happening in these games, overcoming difficult obstacles, doing them together and so on, really do facilitate a kind of understanding and connection among people that transcends national differences.

“We started talking to people about what they thought of Americans, and it was amazing to us, they kept saying the same thing over and over again, which was, ‘You know, they’re really not so bad once you play with them!’”

“We should understand this community better,” he said, and “think about all of its potential and the ways in which it can be used to introduce people around the world to each other and to hopefully have some positive impact in the world.”

The organizers thanked the Richard Lounsbery Foundation, a New York-based group that supports initiatives in science, technology and education, for supporting the project with a large grant.

To watch an archived Webcast of the ceremony, go to http://games.uscpublicdiplomacy.com.