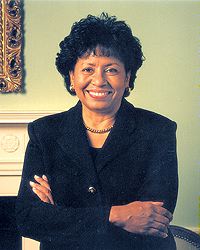 Ruth J. Simmons: “I’d like for every student to experience a moment of learning that is so delicious that they want to hold on to it forever.”

RUTH J. SIMMONS, a gifted administrator and educator who rose from poverty in rural Texas to national fame as the first African-American president of an Ivy League university, will deliver the 2003 Commencement Address.

Simmons was introduced as the 18th president of Brown University in November 2000. In announcing her appointment, Brown chancellor Stephen Robert said, “We have selected an extraordinary leader, a person of character, of integrity, and of depth.”

At her swearing in, Simmons expressed her gratitude to the university. “It gives me enormous pride and joy to think that I will serve as president of an institution that not only has ideals I can share, but also earnestly seeks to live those ideals,” she said.

HER UNPARALLELED rise began humbly. The youngest of 12 children born to a sharecropper in East Texas, Simmons grew up in tremendous poverty. She credits both her parents and her early teachers for instilling in her the values necessary to achieve her educational dreams against enormous odds.

In 1983, she joined the administration at Princeton University. During her time there, she wrote a report on the state of race relations on the Princeton campus that received widespread attention and has since served as a model for other universities addressing on-campus race concerns.

In 1995, Simmons became president of Smith College, the largest women’s college in the United States. She created a lasting legacy at the school, establishing an engineering program – the first at a women’s college – raising nearly $300 million in endowment funds and almost doubling minority enrollment.

SIMMONS assumed the Brown presidency in July 2001. She faced an early challenge in her newfound position after the events of 9/11. Simmons rose to the occasion, making herself available to students and appearing on national television to speak on the day’s aftereffects on college students across the country.

In 2001, Time magazine named Simmons “America’s Best College President.” Describing her future goals as an educational leader, she told the magazine, “I’d like for every student to experience a moment of learning that is so delicious that they want to hold on to it forever and never leave it behind.”

THE BESTOWAL of honorary degrees will cap three days of Commencement-related activities on the University Park campus. This year’s commencement ceremony takes place on Friday, May 16.

• Wallis Annenberg, vice president of the Annenberg Foundation. Annenberg’s philanthropy focuses on organizations and institutions dedicated to enriching and enhancing the quality of the arts, education and culture throughout greater Los Angeles. She serves on the USC Board of Trustees and the USC Annenberg School for Communication and is a member of numerous boards around Los Angeles. In 1993, the Annenberg Foundation gifted $120 million to the university to establish the Annenberg Center, and in September of last year, the foundation bequeathed an additional $100 million, this time to the USC Annenberg School.

• Mary Ellen Avery, president of the American Association for the Advancement of Science and the Thomas Morgan Rotch Distinguished Professor of Pediatrics (emeritus) at Harvard Medical School. Her expertise in respiratory problems of newborns and the prevention and treatment of the problems associated with surfactant replacement have made her a sought-after teacher and speaker throughout the world. In 1991, she was awarded the National Medal of Science by then- President George Bush.

• Joseph Medicine Crow, the first male from the rural Montana Crow Indian tribe to earn a college degree and the first Crow Indian to ever earn a postgraduate degree. He received a masters degree from USC in 1939. During World War II, he achieved the four traditional military deeds necessary to attain chieftaincy as a Crow Indian, an unheard-of feat in modern warfare. For more than 40 years, Crow served as the Crow Indian tribal historian and worked as an appraiser in the U.S. Bureau of Indian Affairs. At the age of 72, he wrote his first book, “In the Heart of Crow Country: The Crow Indian’s Own Stories,” and has since written several more volumes.